(Bloomberg) - Thousands of refugees who had been stranded in Hungary were allowed to cross Austria and began arriving in Germany on Saturday as Europe faced a mounting influx of distressed migrants.

After phone calls late on Friday between German Chancellor Angela Merkel and Austrian Chancellor Werner Faymann, the decision was made to let refugees in Hungary, many of them Syrians, into Austria and Germany, Mr Georg Streiter, Germany's deputy spokesman, said by telephone.

The first of an estimated 5,000 to 7,000 people arrived at Austria's border in buses in the early hours and a special train at Nickelsdorf on the Hungarian border brought refugees to Vienna and Salzburg.

The initial train holding 167 from Austria entered Munich, Germany at 10:25 a.m. local time. As many as 10,000 refugees are expected in Bavaria this weekend, a spokesman for the German federal police said. 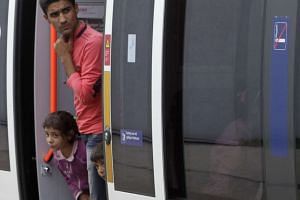 More migrants on march as refugees stream into Austria 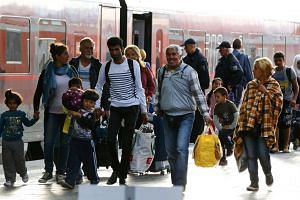 Leaders across Europe are struggling to agree on how to deal with the region's biggest refugee crisis since World War II.

The conflict in Syria, which erupted after the 2011 uprising against President Bashar al-Assad, has displaced more than 6 million people internally and sent more than 4 million registered refugees to other countries, according to the United Nations Refugee Agency.

Mr Wassim al-Hassan, a 29 year-old mechanical engineer from Syria, said from Budapest that he had left his wife and daughter at home because of concerns about the safety of his boat to Greece, which many had died on.

"We have left the train station because Hungarian police won't let us get on trains to Austria," he said in an interview on Saturday while walking along one of Budapest's main thoroughfares.

"We are going by foot and hope we will be picked up by buses."

About 180 kilometers ahead of him in Nickelsdorf, Austria.

Mr Ammar, a 21 year-old hairdresser from Damascus, arrived on Saturday after leaving Lebanon 24 days ago. He hopes to reach his uncle in Stuttgart, Germany.

"Hungarian police is bad, very bad," he said while waiting with several hundred refugees for a shuttle bus to Vienna. "They beat people, many people, even children."

Some have "eye injuries which they say come from flashbangs the Hungarian police used," said Mr Andreas Zenker, a regional Red Cross commander in Nickelsdorf.

"But, most of them don't want to go to the hospital, they clench their teeth and only want to move on."

Germany and Austria agreed to take on the refugees after hundreds broke out of assembly points in Hungary and tried to head for Austria on foot.

In Austria, state rail firm OeBB Holding AG scheduled additional trains and created 4,600 extra seats on its network on Saturday, according to a spokesman for the company.

In Salzburg, near the German border, trains full of refugees now arrive every 30 to 60 minutes.

"The fundamental problem is still the pull-factor that is being transmitted by Germany and Austria," he said. "We are not going to be able to stop the flood of illegal migrants."

EU leaders have sparred over how to address the influx of tens of thousands of people fleeing conflicts in Africa and the Middle East. While Merkel has appealed to other EU states to take in more people, Hungarian Prime Minister Viktor Orban and others want tighter rules and a plan to secure the 28-member bloc's external borders.

"Everybody pities the people that need to be the subject of action," Orban said on M1 state television. "But, it isn't a solution to let them bring life in the country to a halt. We need to force them into order and cooperation without using physical force."

The crisis has roiled the political climate across the EU. Merkel said in her weekly podcast on Saturday that Germany must preserve budgetary discipline even amid rising costs for feeding and sheltering asylum seekers. Accommodation of refugees and integration of those who stay permanently is a "national task," she said.

Merkel wrote a joint letter with French President Francois Hollande to EU officials with proposals on how to deal with the crisis, including binding distribution with EU countries, but no concrete numbers.

Austrian Chancellor Werner Faymann called on Europe to take a decision. "Either we return the Nobel peace prize or we show how we're treating these people that are looking for protection."

Finnish Prime Minister Juha Sipila will offer his own home to refugees from the start of 2016 when it becomes vacant and encouraged other Finns to do the same, he said in an interview with state-owned Yle TV1 on Saturday.

In Britain, Prime Minister David Cameron agreed to take in "thousands more" refugees from Syria, yielding to pressure within his own party, after images of a dead child washed up on a Turkish beach dominated the media on Thursday.

WThe Scottish National Party will devote time on Sept 9 to a parliamentary debate on the crisis.