BIARRITZ, FRANCE (AFP) - World leaders at the G-7 summit have agreed to help the countries affected by the huge wildfires ravaging the Amazon rainforest as soon as possible, French President Emmanuel Macron said on Sunday (Aug 25).

"We are all agreed on helping those countries which have been hit by the fires as fast as possible," he told journalists at the summit in the south-western French resort of Biarritz.

Ahead of the gathering, Macron called on world leaders to hold urgent talks on the wildfires ripping through the world's largest rainforest, pledging "concrete measures" to tackle it.

Although about 60 per cent of the Amazon is in Brazil, the vast forest also takes in parts of eight other countries: Bolivia, Colombia, Ecuador, French Guiana, Guyana, Peru, Suriname and Venezuela.

"This morning, Colombia called on the international community (to help), so we must help out," he said.

"Our teams are making contact with all the Amazon countries so we can finalise some very concrete commitments involving technical resources and funding."

Macron's bid to put the Amazon crisis high on the agenda at the G-7 angered Brazil's far-right leader Jair Bolsonaro, who lashed out over what he sees as outside interference, denouncing the French leader's "colonialist mentality".

Under intense international pressure, Bolsonaro agreed to send in the military to fight the fires. 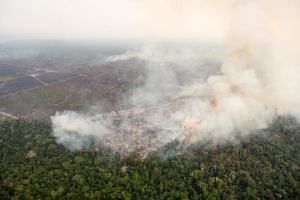 Pope calls for global commitment to put out Amazon fires

Amazon is in flames, but Brazil's past can show path forward

The army on Sunday deployed two Hercules C-130 aircraft to douse fires, as hundreds of new blazes were ignited ahead of nationwide protests over the destruction.

Heavy smoke covered the city of Porto Velho in the north-western state of Rondonia where the defense ministry said the planes have started dumping thousands of liters of water.

Swathes of the remote region bordering Bolivia have been scorched by the blazes, sending thick smoke billowing into the sky and increasing air pollution across the world's largest rainforest.

Experts say increased land clearing during the months-long dry season to make way for crops or grazing has aggravated the problem this year.

"It gets worse every year - this year, the smoke has been really serious," Deliana Amorim, 46, told Agence France-Presse in Porto Velho where half a million people live.

At least seven states, including Rondonia, have requested the army's help in the Amazon, where more than 43,000 troops are based and available to combat fires, officials said.

Pope Francis on Sunday also voiced concern for the rainforest, which he described as a "vital" lung for the planet.

The latest official figures show 79,513 forest fires have been recorded in Brazil this year, the highest number of any year since 2013.

More than half of the fires are in the massive Amazon basin, where more than 20 million people live. Some 1,130 new fires were ignited between Friday and Saturday, according to Brazil's National Institute for Space Research (INPE).

The new data come as protesters plan to take to the streets across Brazil on Sunday, after thousands held demonstrations in the country and in Europe on Friday.