WASHINGTON (WASHINGTON POST) - Sixty-six million years ago, a massive asteroid crashed into a shallow sea near Mexico. The impact carved out a 140km-wide crater and flung mountains of earth into space. Earthbound debris fell to the planet in droplets of molten rock and glass.

Ancient fish caught glass blobs in their gills as they swam, gape-mouthed, beneath the strange rain. Large, sloshing waves threw animals onto dry land, then more waves buried them in silt. Scientists working in North Dakota recently dug up fossils of these fish: They died within the first minutes or hours after the asteroid hit, according to a paper published on Friday (March 29) in Proceedings of the National Academy of Sciences, a discovery that has sparked tremendous excitement among palaeontologists.

"You're going back to the day that the dinosaurs died," said Timothy Bralower, a Pennsylvania State University palaeoceanographer who is studying the impact crater and was not involved with this work. "That's what this is. This is the day the dinosaurs died."

Roughly three in four species perished in what's called the Cretaceous-Paleogene extinction, also known as the K-Pg event or K-T extinction. The killer asteroid most famously claimed the dinosaurs. But T. rex and Triceratops were joined by hordes of other living things. Freshwater and marine creatures were victims, as were plants and micro-organisms, including 93 per cent of plankton. (A lone branch of dinosaurs, the birds, lives on.)

Four decades of research buttresses the asteroid extinction theory, widely embraced as the most plausible explanation for disappearing dinosaurs. In the late 1970s, Luis and Walter Alvarez, a father-son scientist duo at the University of California, Berkeley, examined an unusual geologic layer between the Cretaceous and Paleogene periods. The boundary was full of the element iridium, which is rare in Earth's crust, but not in asteroids.

Walter Alvarez is one of the authors of the new study.

The Hell Creek fossils represent "the first mass death assemblage of large organisms anyone has found" that sits at the K-Pg boundary, study author Robert DePalma said in a statement. 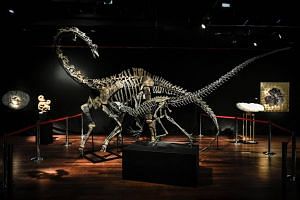 New clues to how dinosaurs got so big

Giant dinosaurs lived on earth much earlier than thought, say archaeologists in Argentina

DePalma, a doctoral student at the University of Kansas, began excavating the site at North Dakota's Hell Creek formation in 2013. Since then, DePalma and other palaeontologists have found heaps of fossilised sturgeon and paddlefish with glass spheres still in their gills.

The site has "all the trademark signals from the Chicxulub impact," Bralower said, including the glass beads and lots of iridium. In the geologic layer just above the fossil deposit, ferns dominate, the signs of a recovering ecosystem. "It's spellbinding," he said.

In the early 1990s, researchers located the scar left by the asteroid - a crater in the Yucatán Peninsula. The impact was named after the nearby Mexican town of Chicxulub.

Suggested "kill mechanisms" for the Chicxulub impact abound: It may have poisoned the planet with heavy metals, turned the ocean to acid, shrouded Earth in darkness or ignited global firestorms. Its punch may have triggered volcanoes that spewed like shaken soda cans.

Hell Creek is more than 3,000km from the Chicxulub crater. But a hail of glass beads, called tektites, rained there within 15 minutes of the impact, said study author Jan Smit, a palaeontologist at Vrije University in Amsterdam who also was an early discoverer of iridium at the K-Pg boundary.

The fish, pressed in the mud like flowers in a diary, are remarkably well-preserved. "It's the equivalent of finding people in life positions buried by ash after Pompeii," Bralower said.

At the time of the dinosaurs, the Hell Creek site was a river valley. The river fed into an inland sea that connected the Arctic Ocean to a prehistoric Gulf of Mexico. After the asteroid struck, seismic waves from a magnitude 10 to 11 earthquake rippled through this sea, according to the study authors.

This caused not a tsunami but what's known as seiche waves, the back-and-forth sloshes sometimes seen in miniature in a bathtub. These can be symptoms of very distant tremors - such as the seiche waves that churned in Norwegian fjords in 2011 after the giant Tohoku earthquake near Japan.

Seiche waves from the inland sea reached 9m, drowning the river valley in a pulse of water, gravel and sand. The rain of rocks and glass followed. The tektites dug "small funnels in the sediment laid down by the seiche," Smit said, "so you know for sure they are coming down when the waves are still running upriver." This is preservation, in other words, of a fresh hell.