SINGAPORE - Forest and land fires sweeping across large areas of Indonesia and South America have released as much carbon dioxide (CO2) as a medium-sized developed economy produces in a year.

The burst of CO2, the main greenhouse gas, is further fuelling climate change and damaging an ecosystem that acts as a natural store for carbon.

It is a double blow in the global fight against climate change with global CO2 emissions already at historically high levels and forests seen as a key way to slow the pace of climate change. Trees take in CO2 as they photosynthesise, locking away the carbon in their roots and trunks. Clearing and burning forests for agriculture destroys this natural safety net.

In a matter of weeks, the fires in Indonesia and Brazil have released more than the total annual greenhouse gas emissions of Australia, according to data from the European Union's Copernicus Atmosphere Monitoring Service.

Put another way, it's like putting 145 million average cars on the road for a year, according to figures from the US Environmental Protection Agency. 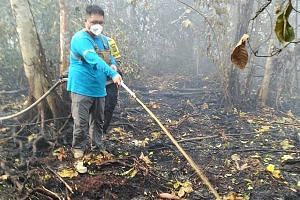 'You can feel the heat radiating', says Singaporean who helped battle forest fires in Indonesia

Interactive: The Amazon rainforest is on fire - how bad is it?

A tale of two burning rainforests: How fires in the Amazon and Indonesia can affect Singapore

But with several weeks likely to go before rains return to the region, the fires in Indonesia are expected to pump out large amounts of additional CO2. It is the same for Brazil, where thousands of fires are still burning and where the dry season can last until early November.

In Bolivia, fires have burned through 4.1 million hectares as of Sept 15, making it another large source of CO2.

That could push this year's emissions from land use change, which comprise 10 to 15 per cent of all mankind's CO2 emissions, higher than last year's, said Dr Pep Canadell, executive director of the Global Carbon Project, an international organisation that quantifies global greenhouse gas emissions and their causes.

He said most of the CO2 from the fires would not come back as forest regrowth. Young forests and regrowth from fires soak up large amounts of CO2 as the trees grow quickly. But in the case of Indonesia and Brazil, the fires are used to clear land for agriculture, not create new forests.

This story is part of The Straits Times' partnership with Covering Climate Now, a global collaboration of more than 250 news outlets to strengthen coverage of the climate story.