Earlier this month, a US rice lobby group released what may seem, to outsiders, a perplexing statement. In it, its president and chief executive Betsy Ward said: "Vegetables that have gone through a ricer are still vegetables, just in a different form."

She continued: "Only rice is rice, and calling 'riced vegetables', 'rice', is misleading and confusing to consumers."

The kerfuffle was caused, as Business Insider reported, by the growing popularity of cauliflower rice, a low-carbohydrate and easily prepared alternative to rice that appeals to a time-starved and health-conscious crowd. Crucially, the alternative threatens the rice industry's market share.

Yet this is far from the only battle that food industry players have waged over food identities. Here are four others, beginning with an example that also involved the rice industry - but in a very different way.

Quartz reported this March that the Good Food Institute in the US petitioned the Food and Drug Administration (FDA) to issue a new rule that would ban the use of the word "milk" in plant-based milks.

This would affect the producers of soy, almond and - yes, you guessed it - rice milk.

In this case, rice milk producers probably need not worry.

US judges have already dismissed at least two cases that tried to prevent companies from using the word "milk" when advertising soy milk. Once in 2013 and the other in 2015, reported Quartz.

2. Mustering the forces for mayonnaise 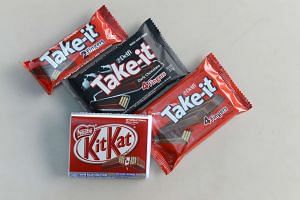 In 2015, food giant Unilever went after Hampton Creek, what was then a small food start-up that made plant-based egg substitutes.

The reason? Hampton Creek was manufacturing two products called Just Mayo and Just Mayo Sriracha, both alternatives to mayonnaise. US standards require that any product called mayonnaise must contain eggs, according to The New York Times.

This created problems for Hampton Creek, because its products had the word "mayo" in them, and their logo featured an egg that appears "cracked" by a young pea shoot.

Fortunately for Hampton Creek, that branding case was resolved in its favour. As reported by The New York Times, the firm simply needed to display product attributes like "egg-free" on the front of the label more clearly, and needed to define "just" in the name as "guided by reason, justice and fairness", rather than implying that its product was a mayonnaise replica.

3. The attempt to enshrine KitKat's shape in law

Since 2010, the owners of KitKat chocolate bars, Nestle, has fought in the UK courts to trademark its four-fingered shape that easily broke apart with a snap.

Winning this would have made it easy to pursue copycat chocolate producers through legal channels, according to The Guardian.

However, in 2015, Nestle's rival Mondelez International successfully argued that a Norwegian chocolate bar it produced called Kvikk Lunsj also had the same shape, and that it could be found in some British stores.

According to The Local, KitKat's origins began in 1935 when it was called Rowntree's Chocolate Crisp, and renamed KitKat Chocolate Crisp in 1937. Kvikk Lunsj was first created in 1937.

In 2015, the European Court of Justice ruled that Kvikk Lunsj could remain sold in UK shops.

And just last Wednesday, on May 17, the UK court of appeal ruled that KitKat's shape had "no inherent distinctiveness", according to The Guardian.

Nestle just can't seem to win this one.

4. When a cake is not a biscuit, for tax reasons

Jaffa cakes are small confectioneries popular in the UK, consisting of a sponge base, a chocolate cap and a thin layer of orange jelly in between.

In 1991, their manufacturer McVities launched a rather unusual case against the UK taxman. They insisted, according to the BBC, that despite being packaged like biscuits and marketed like biscuits, these products were essentially cakes.

Under British law, a tax is levied on chocolate-covered biscuits, but not on cakes, and the authorities wanted to re-categorise jaffa cakes as biscuits to raise revenue.

According to the BBC, the judge looked at 12 different criteria, ranging from its name, to its size, to its composition.

The result? Turns out that jaffa cakes are cakes after all.