HONG KONG • A combination of nailing the virus and rolling out vaccines at one of Asia's fastest rates has put Singapore on top of Bloomberg's Covid-19 resilience ranking this month, dethroning New Zealand for the first time in a measure of the world's best and worst places amid the pandemic.

Singapore brought locally transmitted cases down to near zero thanks to border curbs and a strict quarantine programme, allowing its residents to largely go about their everyday lives, even attending concerts and going on cruises. At the same time, the city state has already administered vaccines equivalent to cover a fifth of its population, an aspect of pandemic control that other virus eliminators like New Zealand, Australia and Taiwan are behind on.

The top three countries in the ranking - Singapore, New Zealand and Australia - are able to provide a pre-pandemic quality of life for their populations, with the exception of international travel, which is basically shut down to prevent the virus from slipping back in.

The Bloomberg ranking uses a wide range of data to capture where the pandemic is being handled most effectively, with the least social and economic disruption - from mortality and testing rates to vaccine access and freedom of movement. It scores economies of more than US$200 billion (S$265 billion) each month on 10 core metrics.

The under-performance of some of the world's most prominent democracies in containing the coronavirus, contrasted with the success of authoritarian countries such as China and Vietnam, has raised questions over whether democratic societies are cut out for tackling pandemics.

The ranking tells a different story: Democracies have made up the majority of the top 10. Success in containing Covid-19 with the least disruption appears to rely less on being able to order people into submission and more on governments fostering a high degree of trust and societal compliance.

When citizens have faith in the authorities and their guidance, lockdowns may not be needed at all, as Japan and South Korea showed through most of last year, although fierce winter waves definitely challenged those more open approaches.

Now No. 2 after a five-month run at the top, New Zealand emphasised communication from the start, with a four-level alert system that gives its people a clear picture of how and why the government acts as the outbreak evolves. Like Singapore, China and Australia, it also shut its borders, which has proven a key metric for containment success.

Investment in public health infrastructure also matters. Undervalued in many places before 2020, systems for contact tracing, effective testing and health education all bolstered the top performers, helping to popularise hand-washing and the wearing of face masks. This has been key to avoiding economically crippling lockdowns, according to Dr Anthony Fauci, the US' top infectious diseases official. Singapore - the No. 1 - mandates masks in public and uses apps to make contact tracing easier.

But if there is one lesson to take away from April, it is that vaccination alone is not enough to end the pandemic.

Places like France and Chile, where people have good access to shots, fell in the ranking as outbreaks swelled, fuelled by virus mutations from the developing world, where vaccines are in short supply and mitigation efforts are failing.

While more than one billion doses have now been administered globally, not enough vaccines are going to poorer nations, like India, which are driving global infection levels to new records.

The United States climbed four rungs to 17th, as its fast vaccination programme saw fewer deaths, though cases ticked up amid a loosening of precautions. 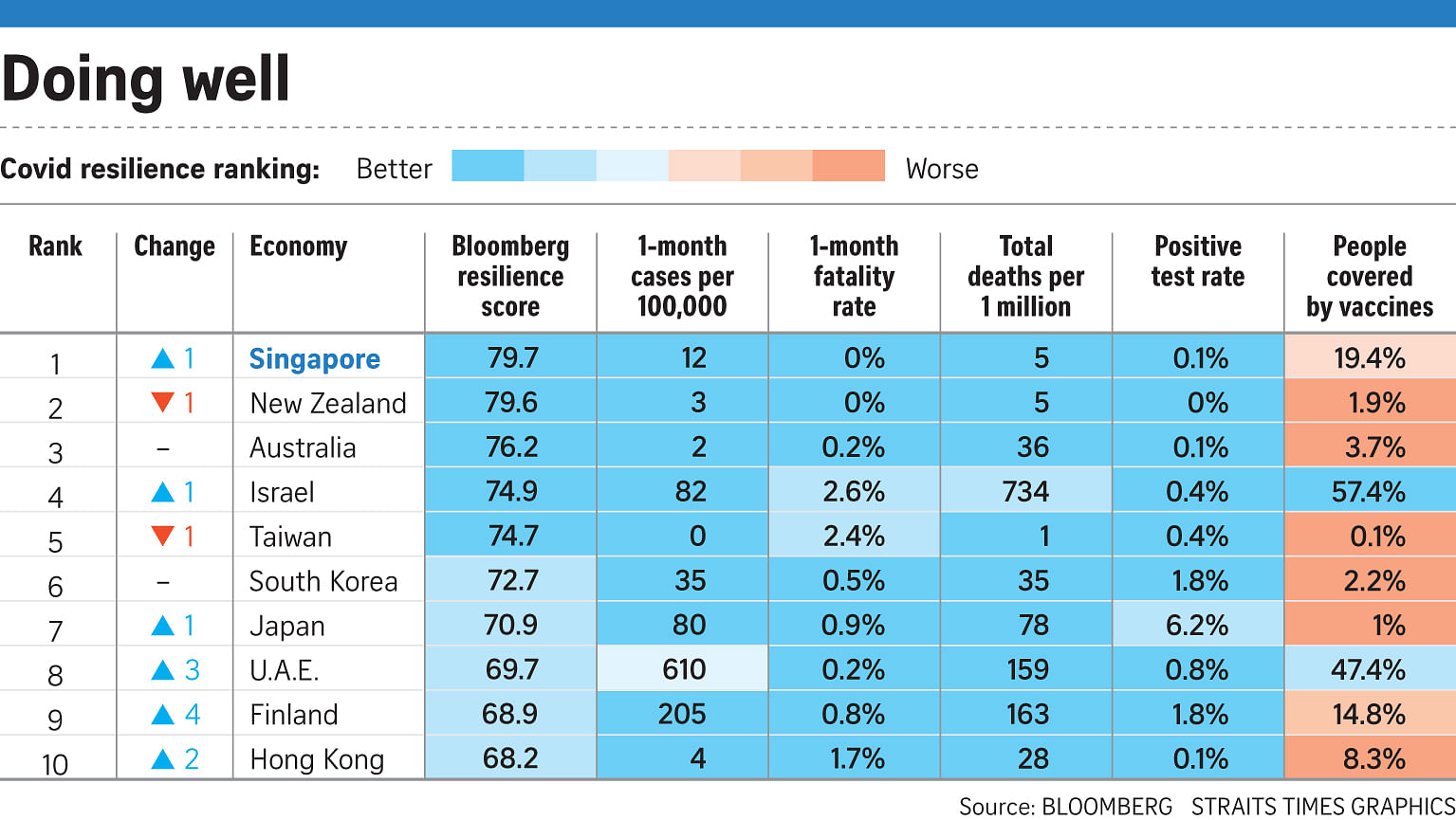 Britain - up seven places to No. 18 - is pairing rapid inoculation with tighter border controls to keep out new variants, the most recent barring travellers from India, where a new "double mutation" strain has emerged.

The start of vaccinations in a number of places a few months ago meant some governments loosened restrictions too early, presenting an opening for variants to seed widely before high enough levels of immunity had been established.

Poland has administered doses enough for 13 per cent of its population, greater penetration than two-thirds of the world. Yet the British variant took over, causing a record spike in cases and deaths.

Meanwhile, the Brazilian variant is ravaging Latin America, even in Chile where a third of the population has been fully vaccinated.

"The longer this drags on, the more likely it is that we will see new variants," said Dr Ali Mokdad, chief strategy officer for population health at the University of Washington. "Then there is a need for a new vaccine or a booster vaccine, and we start all over again."

With the variants' spread outpacing vaccination in many places, the Asia-Pacific region's success at eliminating and keeping out Covid-19 means its economies continue to dominate the ranking.

The fate of tenuous steps towards reopening by some countries, and the race between vaccination and virus variants, will be the key focus for the Covid resilience ranking into May.