PARIS (AFP) - Pregnant women are being urged to think twice before travelling to Latin American and Caribbean countries battling a rise in cases of microcephaly - a rare but brutal condition that shrinks the brains of unborn babies.

The increase has coincided with an outbreak of the usually benign Zika virus. But the virus and the birth defects have not been scientifically linked, leaving many questions about what is happening to these children in the womb.

We asked the experts.

Q: What is microcephaly?

A: Babies with microcephaly have an abnormally small brain and skull for their age, in the womb or at birth, with varying degrees of brain damage as a result. It has many potential causes: infections, viruses, toxins or unknown genetic factors. 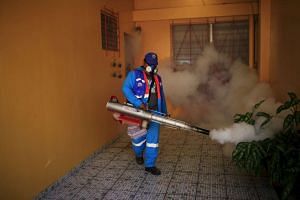 Q: What are the consequences for the child?

A: In serious cases, early death. If the brain is under-developed, the body cannot function properly. In French Polynesia (one of the regions affected), these deformities have caused most of the babies to be stillborn, as the unborn infants simply cannot survive.

A: For children who survive pregnancy and are born with microcephaly, the future is bleak. In the worst cases, children will be severely intellectually and physically handicapped. But even those less severely affected will likely struggle with psychomotor impairment - characterised by slow thought, speech and physical movements.

"It is a real tragedy." - Delfraissy

Q: How does a virus affect an unborn child?

A: Many types of viral infections, such as rubella or cytomegalovirus, can cause physical deformities and intellectual deficiencies, especially during the first three months of pregnancy, when the vital organs are being formed. Viruses can travel through the placenta and infect the foetus directly, sometimes in the brain.

Q: Why is microcephaly thought to be linked to Zika virus?

A: Microcephaly cases seem to have increased in the zone of the Zika outbreak. But also, the virus has been detected in stillborn children with microcephaly, as well as in the amniotic fluid.

The link between Zika and microcephaly is highly likely, but has not yet been proven scientifically.

A: This is a very new situation. Until a few months ago we did not know that Zika could cause congenital infections (which are present from birth) and microcephaly. It caught us all by surprise.

The evidence for the link is relatively strong, and considered strong enough to warrant public health measures.

- Laura Rodrigues of the London School of Hygiene and Tropical Medicine, via the Science Media Centre.

Q: What are we doing to learn more?

A: Studies are underway in French Polynesia, where a Zika outbreak ocurred around the end of 2013 to beginning of 2014, to better understand how the virus may affect foetuses. In Martinique, where there is an outbreak right now, a trial group of pregnant women is being put together for study.

Q: Is Zika contagious between people?

A: There has been a case of sexual transmission, and theoretically transmission by transplantation or transfusion cannot be ruled out. The main route of infection is through mosquitoes.

- Alain Kohl of the University of Glasgow's Centre for Virus Research.