LONDON (FINANCIAL TIMES) - Global food prices have surged by the biggest margin in a decade, as one closely watched index jumped 40 per cent in May, heightening fears that the inflation initially stoked by pandemic disruption was accelerating.

The year-on-year rise in the UN Food and Agriculture Organisation’s monthly index was the largest jump since 2011, as commodity prices surged.

The higher inflation will hit poorer countries reliant on imports for staple goods. For richer countries, the cost of raw ingredients accounts for only part of the overall price paid for products at supermarkets and restaurants.

However, the rise in raw material prices has been so steep that big companies such as Nestlé and Coca-Cola have said they would pass on any increases.

Economists and analysts also warned that the return of eating out as lockdowns lifted around the world would add to price pressures.

“The decline in eating out was not totally compensated with eating at home, but as people start to go to restaurants again, you will see food prices rise,” said Abdolreza Abbassian, senior economist at the FAO.

The cost of labour, transport and shipping is expected to push prices higher in the coming months.

“The rise in the transport cost base with oil price increases and shipping bottlenecks, there is a lot of upward price pressure in the system,” said Caroline Bain at Capital Economics.

In the US, consumer goods companies were likely to face a 6.1 per cent rise in input costs this year compared with 0.7 per cent in 2020, according to analysts at Bernstein.

Tyson Foods, a leading meat company, said raw material prices were more than 15 per cent higher, as well as cost increases in logistics, packaging and labour.

Bruno Monteyne, analyst at Bernstein, said the bout of inflation would increase polarisation in consumer markets between premium products aimed at wealthier consumers - many of whom have additional cash to spare after being stuck at home in the pandemic - and cheaper brands catering for more stretched buyers.

“If you are already buying organic, fair trade ready-to-eat mangoes, you’re probably not going to be too worried about it,” he said, adding that higher ingredients costs would hit mass-market brands.

Cash-strapped consumers will trade down to private-label products and, if inflation is prolonged, move to shopping in cheaper stores, he added.

In the UK and Europe, food inflation has been relatively contained, but the British Retail Consortium this week warned that prices could rise in the second half of the year.

Helen Dickinson, BRC chief executive, said: “While prices are currently falling thanks to fierce competition between retailers, there are many cost pressures around the corner.” 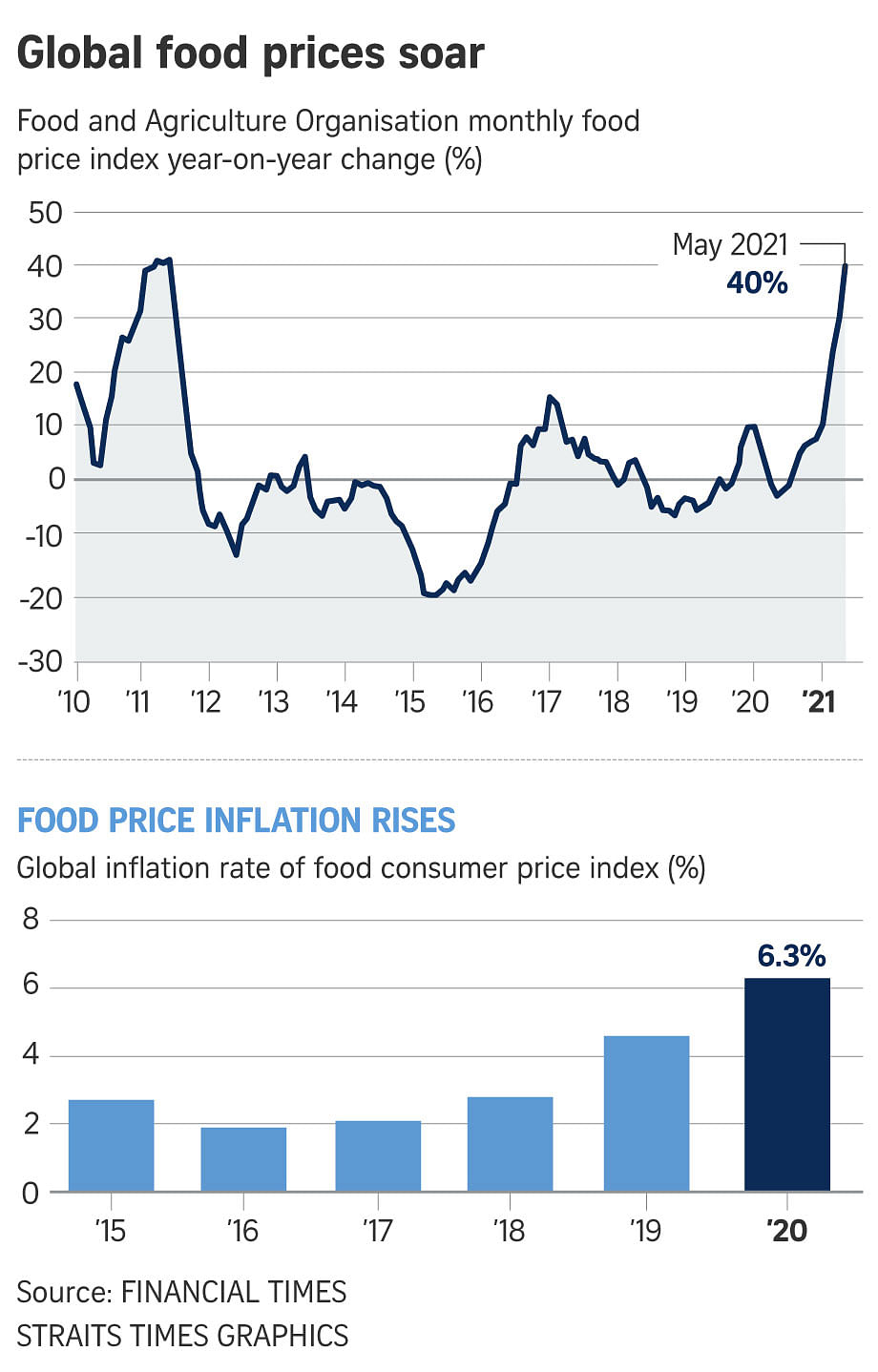 The world’s consumer price inflation for food has already jumped 6.3 per cent in 2020, up from 4.6 per cent in 2019, according to the FAO as the pandemic played havoc with global supply chains, affecting the production and distribution of food.

South America, with 21 per cent food price inflation, Africa and South Asia with 12 per cent and Oceania with 8 per cent were among the most affected regions.

The latest jump in food commodity prices reflected China’s soaring appetite for grain and soyabeans is adding to upward pressure on prices, along with a severe drought in Brazil and growing demand for vegetable oil for biodiesel, said analysts.

Bad weather in Brazil, a big exporter of corn and soyabeans, and rising demand for soyabean oil for biodiesel pushed prices higher, they added.

“China has continued to buy, but with Brazil’s drought proving to be more severe than expected, everyone has to pray that the weather in the US is going to be good,” said Abbassian.

The increases will severely impact countries that depend on overseas producers for their staples.

In West Africa, the price of staples are up 40 per cent over a five-year average, with countries such as Nigeria, experiencing food inflation of 23 per cent, the highest level in 15 years, according to the UN World Food Programme.

The WFP also warned of vulnerable countries faced with soaring prices, including Lebanon, where food inflation soared to 400 per cent last year on the back of a currency crisis, the pandemic and the after-effects of the Beirut port explosion.

Five hot spots where food prices are getting people worried

Chocolate is about to get more expensive