LONDON (REUTERS) - Campaigners for gender equality took to European city streets on Friday (March 8) to mark International Women's Day with celebrations and protests, while in Turkey police fired tear gas to break up a crowd of several thousand women in Istanbul in the evening.

Just after midnight, several hundred women gathered in central Madrid to bang pots and pans and demand more rights for women in a society they say is still dominated by men.

In Berlin, city authorities declared Women's Day a formal holiday and thousands joined a colourful demonstration under sunny skies at the city's Alexanderplatz.

In Paris, demonstrators from Amnesty International waved placards outside the Saudi Arabian embassy that read "Honk for women's rights", and called for the release of jailed women activists, including some campaigners for the right to drive in the deeply conservative kingdom.

In Athens and Kiev, women protesters demanded equality and an end to violence against women.

In Istanbul, Turkey's largest city, hundreds called for the release of Syrian women in jail.

But in the evening, Turkish police fired tear gas to break up a crowd gathered for a march, Reuters witnesses said.

Hundreds of riot police blocked the marchers' path to prevent them advancing along the district's main pedestrian avenue. Police then fired pepper spray and pellets containing tear gas to disperse the crowd, and scuffles broke out as they pursued the women into side streets off the avenue.

It was not clear if anyone was hurt or if people were detained.

In Russia, where Women's Day has been an important festival since Communist times, flowers and congratulatory messages decorated public spaces.

For Spaniards, gender inequality has become a deeply divisive issue ahead of a national election on April 28. A new far-right party, Vox, which opinion polls show winning dozens of seats, has called for a landmark law on domestic violence against women to be scrapped.

"Many people are trying to demonise feminism while it has always been a fight for equality," said Ana Sanz, 36, dressed in a red overcoat and white bonnet echoing the uniforms worn in the dystopian novel and TV series The Handmaid's Tale.

Union UGT estimated six million people walked off their jobs for at least two hours in a strike to demand equal pay and rights for women which it said mobilised more people than a similar action a year ago. 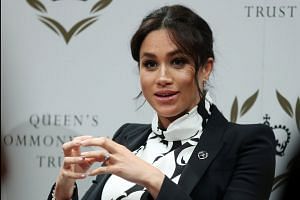 Spain's government said it would not provide estimates on the rate of participation.

Tens of thousands of women, mostly students, crammed Madrid streets and squares, chanting and carrying placards saying: "Liberty, Equality, Friendship" and "The way I dress does not change the respect I deserve!"

Berlin protester Anna Lob told Reuters she had been sexually assaulted during an internship.

"A male colleague grabbed my ass while I was standing in a circle with some men," she said. "Physical assaults in any form or (sexist) comments, jokes or something you have to listen to over and over again - that is a form of discrimination."

Also at the Alexanderplatz, Paula Schramm said she had seen some moves towards greater equality, but many women were still disadvantaged in their daily lives.

"And that is why I am here. I want to change this so that it becomes equal at some point."

In Paris, Cameroonian rights activist Aissa Doumara was honoured for her campaign against forced marriages by President Emmanuel Macron.

At a ceremony at the Elysee Palace, he handed her the first women's rights prize dedicated to the late French minister and abortion campaigner Simone Veil.

'THE EMBRYONIC KICKING OF FEMINISM'

In London, Meghan, Britain's Duchess of Sussex, said she hoped the baby she is expecting this spring with Britain's Prince Harry would follow in her feminist footsteps.

The former Suits actress made the comment during a Women's Day panel discussion at King's College London.

Asked how the "bump" - her first baby - was treating her, the 37-year-old told the audience: "very well".

"I'd seen this documentary on Netflix about feminism and one of the things they said during pregnancy was 'I feel the embryonic kicking of feminism'," she said.

"I love that. So boy or girl or whatever it is, we hope that that's the case, with our little bump."