A female bus driver in Edinburgh has been hailed a hero, after she skilfully swerved away from an oncoming car on an icy road, as heavy snowfall paralysed most of Europe in recent days.

Dashboard camera footage of the near-accident was shared online and 45-year-old Charmaine Laurie, who was behind the wheel of the double-decker bus, soon became an Internet sensation.

Recounting the heart-stopping incident to the Edinburgh Evening News on Thursday (March 1), Ms Laurie said that she had been ferrying 20 passengers, including children, through a blizzard.

As visibility was poor, the mother of two was travelling at about 24 to 32kmh.

But as she came over a hill, a car suddenly appeared in front of her, she said.

In the video, she expertly drifts past the car before weaving back into the lane, while narrowly missing van driver Gareth Smith, 22, as well.

Mr Smith, who can be heard reacting in shock in the video, shared the footage on his social media platforms.

On Facebook, the video has been viewed over 1.1 million times.

"It happened quite quickly. It's hard to describe - my heart was in my mouth," Ms Laurie was quoted in the report as saying.

"I actually thought I was going to hit her," she said, adding that her instincts had kicked in in the nick of time.

"I touched the brake and as soon as I did the back end slid out so I took my foot off and just guided it through the space that was there."

She told the Edinburgh Evening News that she had forgotten about the encounter soon after, as she was focused on the roads. 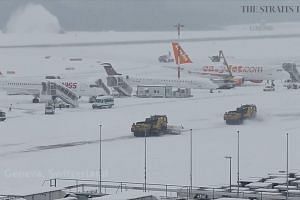 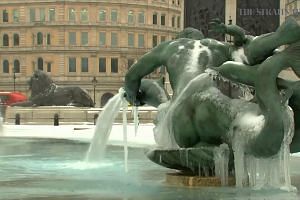 It was only after she got home much later, when her husband told her about the video and praised her for a job well done.

Ms Laurie, who has been a driver with local bus company Lothian Buses for almost three years, said that her training has put her in good stead.

"We train for all types of conditions," she said. "You come across all different obstacles, public walking out in front of you - you have to be ready for whatever."

Many Facebook users lauded her driving skills, with some even calling her a hero.

"Mad drift skills by the bus driver!" one user wrote.

Another said: "Terrifying, what a hero."

In the past week, a blast of Siberian weather dubbed "The Beast from the East" has sent temperatures plunging across Europe.

The snowy weather has trapped several hundred motorists on roads in Scotland, saw thousands of schools closed and grounded planes and trains.