LONDON (BLOOMBERG) - British prime minister Boris Johnson has delivered the first part of his Brexit policy: He's struck a deal with the European Union. Now, does he have the numbers to get it past Parliament?

That hurdle tripped up his predecessor Theresa May. Yet while British negotiators haggled with their EU counterparts this week, another set of talks took place in London, where members of Parliament trooped into Johnson's office to discuss whether they would support him.

But can it be done? Here's how the numbers break down.

Once non-voting MPs are accounted for, Johnson needs 320 MPs on his side to win any vote in the House of Commons.

The last time Theresa May tried to get her deal through, in March, she had the support of 279 Conservatives. They're mostly likely to back a Johnson deal too, but there are some problems.

Johnson expelled a group of MPs from the party in September after they backed legislation blocking a no-deal Brexit. They were joined by Amber Rudd, who resigned in sympathy. Also out of the party is Nick Boles, who quit the Conservatives earlier this year in frustration at the Brexit deadlock.

As a result there are question marks against 19 former Tories who previously backed May's deal. On top of that number, one deal-backing Conservative, Chris Davies, lost his seat to a Liberal Democrat in a recall election.

That leaves Johnson 61 votes short. Where can he go?

The expelled Tories, who take their name from former Justice Secretary David Gauke, are temperamentally loyalists - some had never voted against their party before September. Many of them are looking for a way back in. Given that their objection to Johnson's strategy was the fear he was pursuing a no-deal divorce, they may be happy to get back into line if he reaches an agreement.

But it's not certain. Gauke has questioned whether Johnson's promises can be trusted, while former Chancellor of the Exchequer Philip Hammond has warned of the economic dangers of not having a close relationship with the EU. Several of them, including Antoinette Sandbach, have suggested the UK needs to hold another referendum.

Johnson would be doing very well if he got all of them on side.

Johnson worked hard to try to keep Northern Ireland's DUP engaged, but they have come out firmly against the new deal. They have deep reservations about anything that creates any kind of border between Britain and Northern Ireland, such as customs checks in the Irish Sea, and want a stronger consent mechanism that hands greater say to the regional assembly.

The DUP were the big prize, because they would unlock ...

The self-titled "Spartans" are Conservative MPs who refused to vote for May's deal. They chose their name to recall the fearsome Ancient Greek warriors who held off a numerically superior Persian force at the Battle of Thermopylae.

When Johnson became prime minister, the Spartans were adamant they opposed any but the most minimal Brexit agreement. But in recent weeks they have begun to see the virtues of compromise. This is the result of the Benn Act, legislation that aims to prevent the UK leaving on Oct. 31 unless Johnson has reached a deal. It's made the Spartans fear losing Brexit altogether. 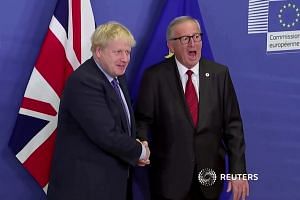 What to expect at Saturday's Brexit showdown in British Parliament

The leader of the Spartans, Steve Baker, twice described an emerging deal as "tolerable" before it was unveiled. But another, former Northern Ireland Secretary Owen Paterson, was more critical. If the DUP were to get on board, most of the Spartans would fall into line. But even without the DUP, many are desperate to get Brexit over the line.

Two Spartans, at least, are fairly sure to back a deal: Priti Patel and Theresa Villiers are both in Johnson's Cabinet.

May pinned her hopes on winning the support of a significant minority of MPs from the opposition Labour Party who believe the 2016 referendum result must be honoured.

She struggled to get more than five to vote with her, but 15 who didn't back her last time joined some who did in signing a letter this month urging the EU to do a deal. That might imply a commitment to actually vote for such an agreement. There's also Kate Hoey, a fierce supporter of Brexit, who's likely to vote the same way as the Spartans.

Against that is the fear of retribution from their party if they do so. Leader Jeremy Corbyn and his team sense that defeating Johnson's deal is a key step on their route to beating him at an election. Others in the party see defeating a deal as essential to securing another referendum.

Any Labour MP voting with the government risks expulsion, though a handful are retiring at the next election anyway so might not see that as an effective threat.

Liberal Democrat Norman Lamb, who is stepping down at the next election, represents a seat that voted to leave the EU and has been critical of his party's anti-Brexit stance.

And Jo Johnson, brother of the prime minister, voted against the deal in March, agreed to join his brother's Cabinet, then resigned. Both could potentially back a deal to settle the issue.

It's tight, but feasible. In charge of wooing MPs is Johnson's political secretary, Danny Kruger, who has been speaking not just to Conservatives but to opposition lawmakers who might be tempted to support a deal.

The opposite of his more famous and abrasive colleague Dominic Cummings, Kruger is a gentle and thoughtful former political speech-writer who has set up two charities to help people on the margins of society.

There is a question, however, of whether the prime minister might lose some support, for example among those Tories who voted for a deal in March and regretted doing so afterward.

There's also another intriguing possibility. When Theresa May was prime minister, she said a Brexit deal that split Northern Ireland from Great Britain was one that no prime minister could accept. Now she's a former prime minister and if that's the path Johnson takes, could she live with it?

She'll almost certainly stay loyal, but then Johnson did make her life very difficult, so it's hard to be sure.