BERLIN - Voters in Germany will head to the polls on Sunday (Sept 24) in an election where Chancellor Angela Merkel is expected to cruise to a fourth term.

Here's a quick guide to the polls:

Who are the main contenders?

There are six major-party candidates for the chancellor's office, but only two have a real chance to win. Merkel, often half-jokingly called "Mutti" or "mother" by many Germans, has led the country for 12 years and is virtually assured of another victory. The 63-year-old, who grew up in communist East Germany, is a former scientist with a doctorate in physical chemistry. She is also the first female chancellor.

In contrast, her main challenger Martin Schulz's background is rather unusual in German politics, in which academic titles and educational achievements often decide careers. Schulz, 61, is a high school dropout from a working-class family who has openly discussed his battle with alcoholism. Before running against Merkel, he was the head of the European Parliament.

Which are the major parties? 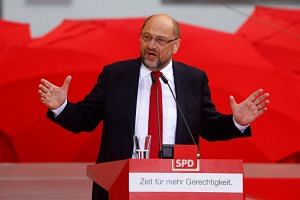 Merkel soup, beer and nudism: When Germany's election got interesting and sometimes weird

Under Germany's complex electoral system, it is unusual for a chancellor to receive an absolute majority of votes from only his or her party. So the main uncertainty surrounding the election is not whether Merkel will continue to lead Germany, but with who and how long they will take to get going.  She will start sounding out partners right after the vote, but coalition building is a protracted process, which could paralyse policy for months at a time when Brexit has shaken Europe's foundations.

The most likely scenario is probably a repeat of Merkel's current coalition with SPD. Her parliamentary party, made up of CDU and CSU, has governed with the SPD for eight of the 12 years that Merkel has been chancellor. Merkel, who has steered the conservatives towards the political centre ground, looks comfortable ruling with the SPD.

Such a coalition would likely have a large majority, provide continuity and broadly agree on Europe, Turkey, foreign policy, migration and security issues.

The far-right, anti-immigrant AfD is set to enter parliament for the first time, and some experts have said it may gain more support than the roughly 10 per cent polls suggest, an alarming prospect for many at home and abroad. All the other parties have ruled out joining it in a coalition.