He has refused to turn up for questioning on charges of rebellion and has hired a Belgian lawyer with a long history of fighting extradition cases involving Spain.

WHAT DOES THE ARREST WARRANT MEAN?

European arrest warrants were introduced in 2004 to replace lengthy extradition processes within the EU, making it easier to return fugitives suspected of serious crimes.

They can be issued for crimes where the maximum penalty is at least one year in prison or where the fugitive has already been sentenced to at least four months in prison.

The judicial authority and police in the receiving country, in this case Belgium, are sent the warrant and tasked with arresting and returning the suspect.

After arresting the suspect, the country has a maximum of 60 days to send him or her back, though in practice most people held under European arrest warrants are returned much more quickly.

Of the 140,000 such arrest warrants issued around Europe between 2005 and 2014, 38 per cent of suspects were found, nearly three quarters of whom were sent back, official EU figures show.

COULD BELGIUM REJECT IT?

In Puigdemont's case, the rebellion charge can bring a 30-year sentence and Belgian lawyer Maxime Chome said "there would be very little room for Belgium to refuse it". There are avenues of appeal but they succeed "extremely rarely", Chome said.

"The basic idea with the European arrest warrant is that you have confidence in the fundamental rights situation in the issuing country. With Spain, you're not talking about a country that practises torture," he said.

Puigdemont has denounced the Spanish legal proceedings as a "political trial" seeking to "punish ideas".

Anne Weyembergh, an expert in European law at the Universite Libre de Bruxelles, said an arrest warrant could in theory be refused on the grounds that it would go against fundamental rights, but cautioned that such cases were very rare.

"These are really exceptional cases. I only know of one in Belgium," she said. "It would be necessary for Puigdemont and his lawyer to show that there was a genuine threat to his fundamental rights." .

COULD HE BE QUESTIONED IN BELGIUM?

Puigdemont's lawyer Paul Bekaert said his client would not go to Spain and suggested the Spanish authorities question him in Belgium instead.

This can be done if a Spanish judge makes a formal request - either by Madrid providing a list of questions to be put by a Belgian police officer or by sending a judge to ask the questions in person.

EU citizens can claim asylum in Belgium, according to the country's CGRA refugee agency.

But Puigdemont has denied planning to do so and moreover even if he did, the chances of success would seem to be very slight.

"It's quite exceptional to obtain asylum for a citizen of a European Union country," Dirk Van Den Bulck of the CGRA told RTBF television.

Belgium will consider asylum applications from other EU countries, but works on the principle that members of the bloc are safe and respect human rights. In the last five years, Belgium has not granted asylum to any EU citizens.

Puigdemont would have to prove a "threat of persecution" in his country of origin and an impossibility of being protected there, Van Den Bulck said.

WHAT ARE THE IMPLICATIONS FOR BELGIUM?

The Spanish standoff is already causing problems for the Belgian government led by Prime Minister Charles Michel, who rules in coalition with Flemish separatists sympathetic to the Catalan cause. 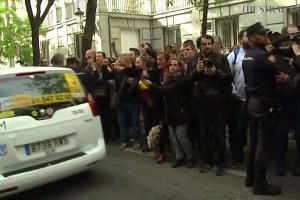 The French-speaking Belgian leader was quick to stress that his government had "not undertaken any step to encourage Mr Puigdemont's arrival on Belgian soil" and warned him not to expect special treatment.

The EU and its member states have been resolute in their support for Madrid during the Catalan independence crisis, but Michel has been more muted, calling for dialogue to resolve the standoff.