LONDON (AFP) - British Prime Minister Theresa May faces a dwindling number of options over Brexit ahead of a crucial vote in parliament later this month on the deal that she has struck with EU leaders.

Despite May's promise to seek "legal assurances" from her European Union (EU) counterparts over contentious parts of the deal, little appears to have changed since she postponed a parliamentary vote on the agreement last month because of its certain defeat.

Here are the three main scenarios facing Britain while the clock ticks down to March 29, 2019 - the day it is scheduled to depart the EU after 46 years:

This is the Brexit that the British government and EU leaders want - and one which many MPs in the British parliament object to.

The deal has been rejected by some of May's Conservatives as well as the opposition Labour and Liberal Democract parties for either keeping Britain tied too closely or too remotely to the European Union.

May promised lawmakers she would wring concessions from Brussels but apparently failed to do so at a summit in December.

She has since spoken to EU leaders including EU President Donald Tusk and European Commission chief Jean-Claude Juncker but appears to have little to show for it.

May's government intends to reintroduce the very same draft for a vote in the week of Jan 14.

It will hope that fear of the chaos that a no-deal exit might bring will force lawmakers to put aside their reservations.

If it loses the vote, the government has hinted it might simply reintroduce slightly tweaked verisions of the same deal until parliament accepts it. 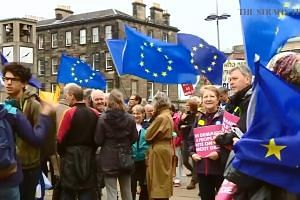 Poll: More Britons now want to remain in EU, and vote on it

This is billed as the doomsday scenario that threatens to trigger a recession in Britain and markedly slow the European Union's economic growth.

It is the default option if the British parliament votes against the deal and there are no other solutions.

May's agreement was meant to keep trade rules between the world's fifth-biggest economy and largest single market almost unchanged for a transition period running to the end of 2020.

A sudden shift to different standards would impact almost every economic sector - and possibly see the costs of everyday products in Britain soar.

Both sides have been forced to ramp up their preparations for a disorderly Brexit over the past few weeks.

EU supporters have been calling for another vote ever since the first one backed Leave by a 52 to 48 per cent in June 2016.

There is no law keeping Britain from doing it all over again, but many question whether this would be democratic - and why a second attempt should take precedence over the first.

It also threatens to be just as divisive with opinion polls showing the country still split over the issue.

Calls for another vote have ramped up over the last few months.

Proponents argue that what the Brexit people were promised looks nothing like the deal on offer and that Britons never backed a no-deal scenario.

But May has warned it "would do irreparable damage to the integrity of our politics." It is also unclear what options to give people in a second ballot - and what happens if Brexit wins again.