DUBLIN (REUTERS) - The Irish "backstop", part of the Withdrawal Agreement that former prime minister Theresa May struck in November, is the key sticking point in efforts to agree on an orderly British exit from the European Union.

New Prime Minister Boris Johnson said this week that to reach a new withdrawal deal, the backstop would have to be struck out.

Under the mechanism, the United Kingdom will remain in a customs union with the EU "unless and until" alternative arrangements are found to avoid a hard border.

Many British lawmakers oppose the prospect of being bound to EU rules and customs duties that would prevent Britain doing its own trade deals and leave it overseen by EU judges.

The following are the key points of the backstop - and the dispute around it.

The Irish government has described the backstop as an insurance policy to make sure Ireland's 500km land border with the British province of Northern Ireland remains open, whatever the outcome of the negotiations on Britain's departure from the EU.

Ireland says this is a key national interest, as any checks or border infrastructure could undermine Northern Ireland's 1998 peace deal. 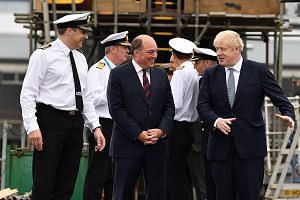 Economic Affairs: The tricky economics of a 'hard Brexit'

Both the EU and the UK have said they do not want any physical infrastructure on the Irish border, and both say they would prefer that the backstop never come into force - but they have failed to agree on alternative arrangements.

The backstop in its original form required that Northern Ireland be kept very closely aligned to EU customs rules to remove the need for physical infrastructure or related checks on the Irish border after Brexit.

The version in the Withdrawal Agreement signed by Mrs May expanded the backstop to cover the whole of the UK - at the insistence of Northern Ireland unionists, who want to avoid the possibility of a virtual border between Northern Ireland and the rest of the UK.

Under the current text of the Withdrawal Agreement, the backstop would be invoked at the end of the transition period in 2020, creating a single EU-UK customs territory, including "level playing field" rules, ensuring fair competition in areas such as environment, state aid, and labour standards.

The clause is designed as a default mechanism to remain in place "unless and until" it is superseded by alternative arrangements that ensure the same outcome.

Brexiters fear that the backstop would keep Britain dependent on rules set from Brussels over which they would have no say, and would hinder their efforts to strike trade deals with third countries - one of the key benefits they see from leaving the EU in the first place.

Some pro-Brexit politicians have said it would make Britain a "vassal state".

Mrs May argued for "alternative arrangements" to avoid a hard border without the backstop and pro-Brexit advocates insist that technology can allow virtual checks without physical infrastructure on the border.

The EU has rejected proposed alternatives, saying they are untested and need to be worked on during the transition.

Others have suggested a time limit or a unilateral exit clause from the backstop to avoid the prospect of the UK being permanently subject to EU rules.

But in recent days, Mr Johnson has rejected this proposal and said the backstop must be scrapped in its entirety.

If there were no deal, Ireland would not be able to let the only EU land border with the UK stand open for long.

If it fails to check goods coming in from Britain, Ireland itself could find the EU raising questions on whether Irish exports to the rest of the Union should remain free of all checks at their its ports.