LONDON (REUTERS) - Britain's Supreme Court will rule on Tuesday (Sept 24) whether a decision by Prime Minister Boris Johnson to suspend parliament for five weeks in the run-up to Brexit was unlawful, potentially throwing his Brexit plans into further disarray.

Below are some key facts about the case and the court.

THE DISPUTE IN A NUTSHELL

Johnson asked Queen Elizabeth to approve the suspension, also known as the prorogation, of parliament from Sept 10 to Oct 14 on the grounds that he needed the time to prepare a new legislative agenda.

His opponents say the real reason was to prevent parliament, where he has no majority, from blocking his Brexit plans.

The Supreme Court has to decide whether he unlawfully misled the queen, Britain's politically neutral head of state.

WHY DOES IT MATTER?

Johnson has vowed to lead Britain out of the European Union by Oct 31, with or without an exit deal agreed with the bloc.

Most lawmakers are determined to stop a so-called "no-deal Brexit", arguing that it would cause severe economic damage. 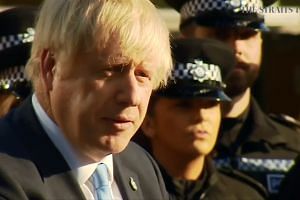 They want him to ask the EU to push back the Oct 31 deadline if no deal has been agreed.

If the Supreme Court rules against Mr Johnson, that could lead to parliament being reconvened earlier than he wanted, potentially causing him further difficulties.

WHAT HAPPENS IF JOHNSON WINS?

Not a great deal. Parliament would likely remain suspended until Oct 14, as planned. It would be a rare moment of triumph for him after he has suffered one defeat after another in parliamentary votes on Brexit.

WHAT HAPPENS IF HE LOSES?

It will depend on exactly what the court says. The justices are sure to deliver a very carefully worded ruling that will be closely scrutinised by all sides. It could say that Johnson's advice to the queen was unlawful but offer no guidance as to what he should do in response, or it could give precise instructions as to what happens next.

WILL HE RESIGN IF HE LOSES?

If the court rules that he deliberately misled the queen, there will undoubtedly be opposition calls for him to resign.

However, he rejected the suggestion on Monday.

WHAT IS THE SUPREME COURT?

The United Kingdom's highest court, created in 2009 to hear cases of the greatest public or constitutional importance.

The court sits on Parliament Square opposite the Houses of Parliament in Westminster, in the heart of London.

WHO SITS ON THE SUPREME COURT?

The court has 12 judges, or justices, whose names are put forward by an independent panel and whose appointments are formally approved by the queen.

WHO HEADS THE SUPREME COURT?

The court's president is Brenda Hale, addressed formally as Lady Hale. Now 74 and the court's oldest justice, she was appointed two years ago. An outspoken advocate of gender equality, she is the court's first female president.

WHAT DOES SHE SAY ABOUT THIS CASE?

Hale says the ruling is about points of law, not politics."I must repeat that this case is not about when or on what terms the United Kingdom leaves the European Union," she told the court.