BARCELONA (REUTERS) - Demand for water is expected to increase by nearly one-third by 2050 as the planet's population expands, according to the 2018 World Water Development Report from the United Nations.

To provide enough water for drinking, growing crops, generating power and other uses, governments and businesses should work more closely with nature, which controls the water cycle, the report said.

Incorporating more green space into cities, conserving wetlands, and farming in ways that keep the soil healthy are examples of the "nature-based solutions" backed by the report.

These can also help protect people from floods, drought and other water-linked threats, it said.

Here are some facts on water use, and the risks of too much or too little water.

* Global water use has increased by a factor of six over the past 100 years, and is growing steadily at a rate of about 1 per cent per year spurred by population growth, economic development and changing consumption patterns.

* Household water use accounts for about 10 per cent of global water withdrawals, and is expected to rise significantly by 2050, particularly in Africa and Asia where domestic demand could more than triple.

* Global demand for agricultural and energy production - both of which use water intensively - is expected to increase by about 60 per cent and 80 per cent, respectively, by 2025. 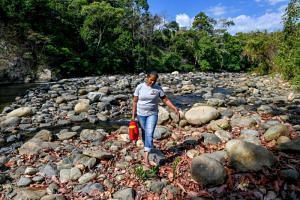 * Agriculture accounts for about 70 per cent of all water use worldwide. Water withdrawals for irrigation have been identified as the main driver of groundwater depletion.

* Worldwide, 3.6 billion people, or nearly half the global population, live in areas at risk of being water-scarce for at least one month a year, nearly three-quarters of them in Asia. The number could increase to 4.8 billion-5.7 billion people by 2050.

* At about 4,600 cubic kilometres per year, global water withdrawals are now already near maximum sustainable levels.

* Since the 1990s, water pollution has worsened in almost all rivers in Africa, Asia and Latin America.

* An estimated 80 per cent of industrial and municipal wastewater is released to the environment without treatment, resulting in a deterioration of overall water quality with harmful impacts for health and ecosystems.

* About 30 per cent of the global population live in places routinely hit by either floods or drought.

* The number of people at risk from floods is projected to rise from 1.2 billion today to around 1.6 billion in 2050.

* Some 1.8 billion people are affected by land degradation, desertification and drought.

* Since 1900, an estimated 64 to 71 per cent of the world's natural wetland area has been lost due to human activity.