LONDON (NYTIMES) - A week after a retired Russian double agent and his daughter were poisoned by a nerve agent in the small city of Salisbury, British authorities on Sunday (March 11) asked anyone who was near the former spy, Sergei V. Skripal, that day to wash their clothes.

They also advised putting unwashable items into sealed plastic bags, washing their eyeglasses in warm water and cleaning their phones with "baby wipes". The advisory applies to people who visited two locations where Skripal and his daughter, Yulia S. Skripal, spent time on March 4: an Italian restaurant and a pub. Shortly after leaving the pub, Skripal and his daughter were found unconscious on a bench.

As many as 500 customers could be affected, authorities said.

Four days after the Skripals were found, police announced that the two had been poisoned by an unspecified nerve agent, a category of lethal chemical that includes sarin gas and VX.

On Sunday, the chief medical officer for England, Sally Davies, told reporters that trace contamination had been found at the pub and in the restaurant, Zizzi.

Authorities were clearly walking a fine line in the investigation, trying to recommend precautions without alarming the public.

"While there is no immediate health risk to anyone who may have been in either of these locations, it is possible, but unlikely, that any of the substance which has come into contact with clothing or belongings could still be present in minute amounts and therefore contaminate your skin," the advisory said.

"Over time, repeated skin contact with contaminated items may pose a small risk to health," it added.

The advisory said it was not necessary for people who had visited those venues to see a doctor unless they were experiencing symptoms. It also said that the risk to the general public "has not changed and remains low".

Chemical weapons experts in hazardous material protective suits have been deployed to five sites visited by Skripal and his daughter the previous Sunday: his home, the cemetery where his son and wife are buried, the restaurant, the pub and the bench where the two collapsed. 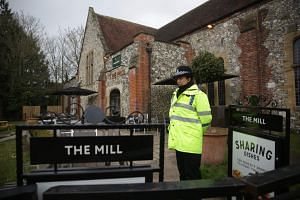 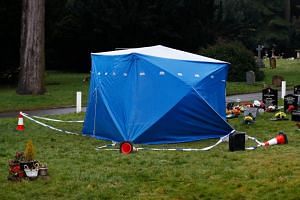 Around 180 military troops were called in to help clear the area, and the ambulance used to transport the two victims was wrapped in plastic and loaded onto a military transport vehicle.

Rebecca Hudson, a reporter for The Salisbury Journal, said Sunday that local residents were beginning to complain that they had been kept in the dark about the risk level.

"I think people are frustrated that this information has come out seven days on, when they've been told throughout that there's minimal risk," she said by phone. "There is definitely the sense that they were not given enough information earlier in the week." In an editorial in the newspaper, Annie Riddle said that while there "wasn't a hint of panic" during the first days of the investigation, residents have become progressively more concerned, as they have watched "more and more areas being taped off, barriers going up, more and more military and emergency services rushing about, and with nobody in authority saying a word."

She added: "I find myself starting to wonder whether I've underestimated the potential danger. While no one expects any national security secrets to be given away, could we please be treated like grown-ups and be given a bit more idea exactly what is going on?"

Ruby Vitorino, 58, who works in a local jeweler's shop, said many of her neighbors in "Smallsbury," as she calls it, have responded with humor.

"People are making a lot of jokes about it," she said. "It sounds like they're being told to wash a week after the event. Most of them have already washed, hopefully." She added that the owner of the Bishop's Mill pub, which has been sealed since the incident, kept two rabbits in the pub building and was so worried about their welfare that he started a "Save the Rabbits" campaign.

She said that he had been reassured that emergency workers in hazardous material suits "have been sent in to feed the rabbits and clean them out." She added, "The English are very into their pets."