MOSCOW (BLOOMBERG) - In his state of the nation address on Wednesday (Jan 15), Russian President Vladimir Putin proposed a sweeping constitutional reform that would give him several options to retain power after 2024, when his term ends.

The announcement led to the resignation of Prime Minister Dmitry Medvedev's government, showing that a full reset of Russia's governance system is under way - and that Medvedev won't succeed Putin as president, as he did for one term in 2008.

Having spent the first hour of the 80-minute speech on demographics and the economy, Putin suddenly turned to the constitution.

Most of his proposals would leave Russia, whose current constitution now enshrines near-dictatorial presidential powers, with a less powerful presidency - and a more limited choice of potential presidents.

First, Putin suggested that only people who have resided in Russia continuously for more than 25 years and who have never possessed a foreign passport or permanent residence permit should be allowed to run for president.

The current version of the constitution says a second citizenship in no way limits a Russian's rights. Putin's proposals would rule out a large number of wealthy and educated Russians.

According to flawed official statistics, 543,000 Russians hold a second citizenship or a foreign residence permit. The reforms would also cut off the country's huge emigre community, which the United Nations Population Division estimates at 10.5 million, the equivalent of some 7 per cent of Russia's population.

This is part of what Putin sees as a sovereignty-enhancing package: According to the Russian leader, lower-ranking public servants, such as the prime minister, ministry heads, governors and judges should be banned from holding dual citizenship and foreign residence permits.

Today, the constitution proclaims the priority of international obligations, which results in a steady stream of adverse rulings from the European Court of Human Rights (last year's decisions have cost Russia about US$11.4 million in damages, but behind that relatively small amount is a string of political embarrassments) and some costly debacles in various economic tribunals, such as state-owned natural gas company Gazprom's loss of US$2.6 billion to Naftogaz, the owner of the Ukrainian gas transportation system.

Putin wants to make it impossible for any outside actors - international courts, Russian emigres, foreign governments, Western educational institutions - to have any effect on Russia's inner workings. 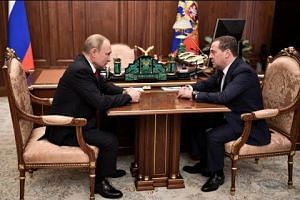 Moving on, Putin suggested giving the upper house of parliament - which, unlike the directly elected lower chamber, consists of regional representatives - a say in the key security, defence and foreign policy appointments, today an exclusive province of the president.

He also signalled his consent to a change that would eliminate the loophole that allowed him to return to the Kremlin in 2012: the constitutional formula that bans a president from serving more than two consecutive terms. According to Putin, he's fine with eliminating the word "consecutive," which would bar him from reclaiming the presidency in the election of 2030, when he turns 78.

It also would have limited the ability of Medvedev to serve as president for more than one term in addition to the four years he already served.

But Medvedev's resignation as prime minister and the job offer Putin has made him - as number two on Russia's Security Council, an important advisory body but not as key as the Cabinet - means he's not likely to be Putin's chosen successor.

By proposing curbs on presidential powers, Putin opens three paths for himself after 2024 that are less straightforward than a direct prolongation of his powers, as has occurred in Belarus and several ex-Soviet Central Asian nations.

One is to become a prime minister with strengthened powers and stay on indefinitely. Another is to try running the country from the parliament speaker's chair. The third is to govern from behind the scenes as the leader of the parliament's dominant party - the way Jaroslaw Kaczynski, leader of the Law and Justice Party, runs Poland.

All of these options require continued control over Russia's political system, sufficient for the parliament to remain, in effect, a one-party body. As the political analyst Kirill Rogov put it in a Facebook post: "In a noncompetitive system without free access to elections for parties and candidates and with unfair, falsified elections, the transfer of powers to parliament would, most likely, mean the transfer of these powers to the leadership of the party that dominates in parliament."

He went on: Such a configuration, which resembles the Chinese one, will allow Putin to retain de facto control indefinitely, while putting forward an entire group of potential successors who would compete among themselves.

But even Putin's knowledge and control of the Russian political system don't provide a strong guarantee of lifelong power retention or, perhaps more importantly for Putin, a lifelong personal security guarantee. Strengthening other players in a complex system doesn't fit his leadership style. That's not what he has done for the last two decades.

That's what makes another proposal Putin threw out in Wednesday's address especially intriguing. Putin would like to enshrine in the constitution a clear role for the State Council, a body that now has only an advisory capacity.

Putin created the council soon after taking power in 2000, and it includes the regional governors, the speakers of both houses of parliament and parliamentary party leaders. Today, the president is chairman of the council. But that won't necessarily be the case after the proposed reform; Putin may opt to head the council after giving up the presidency, which would make his post-2024 role a lot like that of Kazakhstan's first president, Nursultan Nazarbayev, who gave up his old post last year to serve as head of the country's newly empowered Security Council.

Putin's constitutional reform proposals are so far-reaching and, in some key aspects, so vaguely formulated that a lot of questions remain unanswered. Putin proposed adopting the reform by popular vote, but it's unclear how such a vote could be structured (perhaps Turkish President Recep Tayyip Erdogan's constitutional referendum of 2017 can serve as a model).

Establishing the primacy of Russian laws over international treaties appears to require the adoption of an entirely new constitution, since it reconsiders one of the current document's basic tenets.

The powers and composition of the State Council are also unclear, as is the extent to which the parliament's powers are to be expanded; for example, whether it will be able to fire ministers, not just appoint them.

There's a reason, however, for Putin to put out all the ideas now. The Russian establishment has been getting worried about the direction of the transition and about Putin's intentions. Now, it should be clear to everyone that he's about to seek a role that's different from the presidency, a position above the fray. It's not in Putin's interest to announce exactly which one, but it's important for him to signal that he's in charge of working out the final shape of things - and that he intends to stick around after 2024 in some capacity. Otherwise, he'd let his successor come up with any constitutional changes that might be necessary.

The Russian opposition, of course, has read the signals, too.

"The main outcome of Putin's address: How dumb and/or crooked are all those who said Putin would leave in 2024," tweeted Alexey Navalny, Putin's best-known political opponent.

Indeed, whatever the formal shape of the political system Putin intends to create at the end of his presidency, Russia's real constitution is in Putin's head. That's where the missing details will come from, too.