MOSCOW (BLOOMBERG) - Kremlin officials are in intense negotiations with their counterparts in Washington to strike at least one deal that they hope will let President Donald Trump tout his summit with Russian President Vladimir Putin as a triumph that justifies steps to repair relations.

At the top of the list for the July 16 meeting in Helsinki, Finland, is Iran's role in Syria, an issue that Moscow is simultaneously negotiating with Teheran, a senior Russian official said on condition of anonymity because he is not authorised to comment on the record.

President Putin has agreed in principle to US and Israeli demands that Iranian-backed forces in southern Syria be kept away from Israel's border, replaced with troops loyal to the government in Damascus, two Kremlin advisers said.

After studying President Trump's meeting last month (June) with North Korean leader Kim Jong Un, during which he announced a surprise halt to US military exercises with South Korea, Mr Putin decided he needs to negotiate with the billionaire personally, the senior official said, without elaborating.

The two leaders may meet without aides, as Mr Trump and Mr Kim did in Singapore, Kremlin spokesman Dmitry Peskov said.

US Ambassador to Russia Jon Huntsman confirmed plans for a one-on-one meeting during a conference call on Thursday (July 5), saying that Mr Trump will go into the encounter with his "eyes wide open" about Mr Putin's intentions.

Mr Trump has shifted away from his predecessor's policy of demanding the ouster of Syrian leader Bashar al-Assad, a position formulated before Russia turned the tide of the country's civil war in Mr Assad's favour with Iran's help. 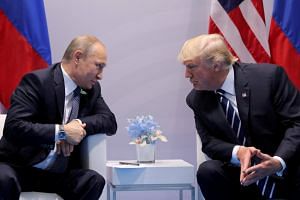 Trump and Putin meeting in Helsinki on July 16

US National Security Adviser John Bolton, who met Russia's recently re-elected president to lay the groundwork for the summit, told CBS News on Sunday that Mr Assad is no longer "the strategic issue" in Syria - Iran is.

"We'll see what happens when the two of them get together," said Mr Bolton, who has long advocated regime change in the Islamic Republic.

"There are possibilities for doing a larger negotiation on helping to get Iranian forces out of Syria and back into Iran, which would be a significant step forward."

The first extended meeting between the two presidents is being viewed in Russia as an opportunity to turn a new page in relations that have plunged to rock bottom over a host of issues. They include the war in Syria and the sanctions imposed on Russia for its alleged election meddling, its annexation of Crimea and support for secessionists in Ukraine.

The summit, if successful, could boost the likelihood of sanctions de-escalation, Citigroup said in a research note.

Still, there are major questions about Mr Putin's ability to enforce any agreement involving Iran's actions in Syria, even if he offers to deploy troops to stabilise the border areas in question. This, in turn, is fuelling concerns in Washington and among US allies in Europe that Mr Trump may proclaim the Helsinki meeting a breakthrough without extracting any real concessions.

Russia may have supplanted America as the indispensable arbiter in various Mideast conflicts but there is only so far Mr Putin is willing to go to appease Mr Trump when it comes to Iran, according to Mr Andrei Kortunov, head of the Russian International Affairs Council, a research group set up by the Kremlin.

"Trump can't force Putin to turn away from Iran," Mr Kortunov said. "Putin is not willing to push Iran too hard and he cannot rely on Trump."

Russia and Saudi Arabia have already irked Iran and pleased Mr Trump by agreeing to roll back some of the cuts oil producers introduced to boost flagging prices. At the same time, Russia is also working to salvage the Iranian nuclear accord that Mr Trump abandoned and mitigate the sanctions he has reimposed. The foreign ministers of Russia, China, France, Germany and Britain will discuss the issue with Iranian officials on Friday in Vienna.

Russian Foreign Minister Sergei Lavrov said on Wednesday that he will confer with US Secretary of State Mike Pompeo after the Helsinki summit about implementing whatever agreements are reached. Even so, he cautioned that "it's absolutely not realistic" to demand Iran pull out of Syria altogether.

"As in any other part of the world, you have to start by sitting down at the negotiating table, lay out your concerns and talk about how to resolve them on a mutually acceptable basis," Mr Lavrov told reporters in Moscow.

After seven years of grinding conflict, Iran and proxy forces including Hezbollah have built up a formidable presence along Syria's borders with Israel and Lebanon. That has drawn repeated missile strikes from Israel and threats of further action, which Russia is using to pressure Iran, according to Mr Dmitri Trenin, head of the Carnegie Moscow Centre.

While Russia and Iran have been on the same side, backing Mr Assad against rebels armed by the US and its allies, their interests are now diverging as Mr Putin seeks to secure his gains with regional backing, said Mr Trenin, author of the 2017 book, "What Is Russia Up To in the Middle East?"

Israeli Prime Minister Benjamin Netanyahu is scheduled to meet with Mr Putin in Moscow next week for the second time in as many months. This follows a visit to the Russian capital last month by Lebanese Prime Minister Saad Hariri. Russia backs a plan to replace Hezbollah fighters entrenched on the Syrian side of the border with Lebanon, said Ms Elena Suponina, a Middle East expert in Moscow. That is part of efforts to encourage several million Syrian refugees in neighbouring countries to return home.

"Russia wants to see the Syrian government take control of as much territory as possible," Ms Suponina said.

Mr Putin's shifting positions on Syria and oil have angered officials in Teheran, according to Mr Ali Khorram, a former Iranian ambassador to the United Nations.

"Russia has not only stabbed Iran in the back when it comes to Syria, but also voluntarily announced its readiness with Saudi Arabia to push Iran's quota out of OPEC," Mr Khorram wrote in the Arman daily newspaper.

Mr Putin's strategy is to try and find a middle ground between the conflicting interests of major players. In particular, he may give Israel a green light to bomb any Iranian convoy that tries to deliver advanced weaponry to Hezbollah while also allowing Iran to maintain shipments of conventional arms to its Lebanese proxy forces, according to Mr Kortunov, the Kremlin adviser.

For Iran, the overriding goal is to maintain its influence inside Syria and keep supply lines open, said Israel-based fellow Ehud Yaari at the Washington Institute.

Added Mr Sami Nader, head of the Levant Institute for Strategic Studies in Beirut: "Russia has an interest to bleed Iran in Syria, to weaken Iran but not collapse Iran because it may lose the Assad regime, which is its major card.

"They want Iran in check and under control."