LONDON (NYTIMES) - US Secretary of State Mike Pompeo has made a blistering attack against China as he stepped up pressure on Britain, warning that United States intelligence-sharing could be risked by the involvement of a Chinese company in a new British telecommunications network.

Speaking in London, Mr Pompeo argued that China posed such a range of economic and security threats that the world now faced "a new kind of challenge, an authoritarian regime that's integrated economically into the West".

The question on the table in Britain is whether the government should allow Huawei, a Chinese company considered a security risk by the US, to help build some of the next-generation, 5G mobile network in Britain.

Discussions on that topic were the subject of a leak that last week prompted the firing of the British Defence Secretary Gavin Williamson, who had opposed working with the Chinese firm.

Huawei denies it is a security risk.

In a speech for the 40th anniversary of Margaret Thatcher's first election victory, Mr Pompeo asked whether the British leader who came to be known as the Iron Lady would have allowed China "to control the Internet of the future". 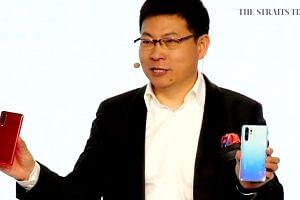 "Why would anyone grant such power to a regime that has already grossly violated cyberspace?" he asked. "What can Her Majesty's government do to make sure sensitive technologies don't become open doors for Beijing's spymasters?"

He also issued a stark reminder to his British hosts that if security were compromised, it would restrict the ability of the US to share sensitive intelligence information with the British, as it does extensively.

He also said at an earlier news conference, however, that he has "great confidence that the United Kingdom will never take an action that will break the special relationship", a reference to the close ties of the two nations and a comment that reassured some British officials that damage to relations with the US can be avoided.

Britain's Foreign Secretary Jeremy Hunt told reporters that the government had not made its final decision on Huawei, and would never take a decision that would compromise its ability to share intelligence with its closest allies, "or in particular with the United States".

British officials believe it is possible to give Huawei some access to non-core elements of its new 5G system while maintaining the security of more sensitive networks.

The US has warned several governments around Europe against working with Huawei, and the topic has become increasingly touchy as countries decide on how to build their 5G networks.

The issue is particularly delicate for a British government that is planning to leave the European Union and wants to forge stronger economic links with China and other Asian economies, while also building on its close diplomatic and trading relationship with the US.

Mr Williamson was fired last week after an investigation into a report in The Daily Telegraph regarding discussions about the Huawei decision in Britain's National Security Council, of which Mr Williamson was a member. 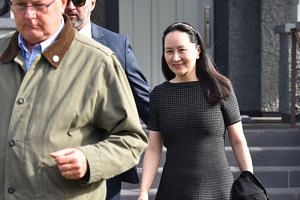 China urges UK not to discriminate against Huawei in 5G development

The article suggested that Prime Minister Theresa May had overruled objections from some Cabinet ministers, including Mr Williamson, about bringing the Chinese company into the 5G project. Mr Williamson has denied being the source of the leak.

In Parliament on Wednesday, Mr Julian Lewis, a senior lawmaker in Mrs May's Conservative Party and chairman of the House of Commons Defence Committee, asked the Prime Minister whether it would not "be naive to the point of negligence to allow Huawei further to penetrate our critical national infrastructure".

Mrs May said she was "not considering any options that would put our national security communications at risk, either within the UK or with our closest allies".

During his visit, Mr Pompeo, who held talks with Mrs May and Mr Hunt, also made an apparent swipe at their political adversary, Mr Jeremy Corbyn, the left-wing leader of Britain's opposition Labour Party.

Speaking at his news conference, Mr Pompeo described the support of some politicians for Venezuelan President Nicolas Maduro as "disgusting".

Unlike the British government, Labour has refused to condemn Mr Maduro, arguing that Venezuela's political future was a matter for its own citizens. Mr Corbyn, who is no fan of US President Donald Trump, has announced that he would not attend an official dinner during Mr Trump's scheduled state visit to Britain next month.