NEW YORK (REUTERS) - United Sporting Cos, a large firearms distributor whose roots date to the Great Depression, filed for bankruptcy protection on Monday (June 10) and said it plans to liquidate, hurt by falling sales after President Donald Trump was elected and as Dick's Sporting Goods Inc began moving away from firearms.

The company, whose units including Ellett Brothers serve 20,000 retailers in all 50 states, said other reasons for its Chapter 11 filing were too much debt and discounting caused by excess inventory. It also cited "significant" disruptions in outdoor retailing such as Bass Pro Shops' 2017 purchase of Cabela's and Gander Mountain's bankruptcy.

The firearms industry has faced pressure on sales after Trump's 2016 election eased gun control fears, even as a spate of US mass shootings has prompted calls for more curbs on gun ownership.

The National Shooting Sports Foundation in January said some 13.1 million firearms were estimated to be sold in 2018, down from 14 million the previous year and down 16.5 per cent from the record 2016 sales of 15.7 million.

A previous boom that saw gun sales double over a decade through 2016 corresponded largely with Democratic President Barack Obama's time in office, when fears that gun control laws would be enacted drove gun aficionados to stock up.

But he said the Republican Trump's unexpected win over Democrat Hillary Clinton was a factor in net sales falling to US$557 million (S$760.8 million) in 2018 from an average US$885.3 million from 2012 to 2016, with an accompanying glut of inventory. 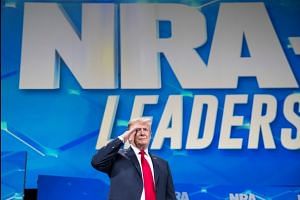 Trump heeds gun lobby, decides to pull US out of UN arms treaty

Dick's, meanwhile, decided after 17 people died at the Feb 2018 Parkland, Florida school shooting to stop selling guns to people under 21, a decision also made by Walmart Inc, and to remove assault-style rifles from its stores. In March, Dick's decided to end firearms sales at 125 stores.

In its petition filed with the US bankruptcy court in Wilmington, Delaware, USC said it had between US$100 million and US$500 million of liabilities. It plans to keep operating during the wind-down.