GENEVA (REUTERS) - Asylum seekers at the Mexican border fleeing violence or persecution are entitled to lodge claims in the United States to obtain sanctuary there, UN agencies said in a fresh attempt to shield migrants from tough US immigration policies.

United Nations officials have repeatedly urged Washington to ensure asylum seekers are protected, but US President Donald Trump said on Monday (Nov 26) Mexico should send migrants seeking asylum in the United States back to their home countries.

US authorities fired tear gas canisters toward migrants in Mexico - near the border crossing separating Tijuana from San Diego, California - on Sunday when some rushed through border fencing into the United States. Mexico's foreign ministry presented a diplomatic note to the US government on Monday calling for a "full investigation".

After Trump signed an order limiting asylum rights earlier this month, the UN High Commissioner for Refugees (UNHCR) said the United States must make sure anyone fleeing violence or persecution can get protection "without obstruction".

UNHCR spokesman Babar Baloch, asked on Tuesday about US forces firing tear gas at migrants, told a Geneva news briefing: "We are following those reports with concern, we are still trying to understand what transpired there."

Border management is "a sovereign prerogative of national governments", but border security and international protection for refugees are not mutually exclusive, he said.

"It means that any person whose life is at risk in their country of origin must be able to access territory and request asylum in a safe country. And each asylum request should be considered individually. 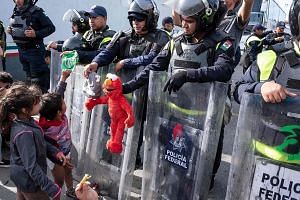 "We have been repeating our call on the US authorities to grant access to the territory and to asylum procedure to those who are fleeing persecution and violence," he said.

Sunday's incident was the latest chapter in a saga that has pitted Trump's hardline immigration policies against thousands of migrants who have made their way north through Mexico from violent and impoverished Central American countries.

Some 3,500 migrants from the caravans have applied for asylum in Mexico, Baloch said.

Seven migrants have died in incidents along the way, Joel Millman of the International Organization for Migration (IOM) said.

"We believe governments have the right to defend their borders and should do so responsibly," he said. "We also think migrants certainly should have the expectation that there be an access that is legal and safe for them to at least seek to cross a border."