MUNICH, GERMANY (AFP) - Ukrainian President Volodymyr Zelensky on Saturday (Feb 15) said he wanted to turn the page on United States President Donald Trump's impeachment scandal, which has left its mark on ties between the two nations.

Mr Zelensky unwillingly found himself at the centre of Washington's political drama over a phone call with Mr Trump that prompted accusations of abuse of power by the American leader.

"After the whole impeachment soap opera, I want to go (to Washington) and start a blank page on our relations," Mr Zelensky told the Munich Security Conference.

The US House of Representatives impeached Mr Trump for pressuring Ukraine to investigate his political opponents, dangling military aid to Ukraine and a White House visit in return.

While Washington has yet to schedule a visit by Mr Zelensky, the Ukrainian leader has invited Mr Trump to Kiev.

"I'm ready to host him before he hosts me," he told the audience at the top-level security gathering, garnering applause.

Ukrainian Foreign Minister Vadym Prystaiko, also in Munich, said the impeachment saga had weighed on the country's relationship with the United States, a crucial ally for Kiev in the face of a resurgent Russia.

"There are things that have not yet been resolved" following Trump's acquittal by US senators in his impeachment trial, Mr Prystaiko told reporters.

He singled out the departure of US special envoy Kurt Volker, who played a key role in talks with Moscow about the conflict in eastern Ukraine's Donbass region.

Mr Volker resigned last September before testifying in the US Congress as part of the impeachment inquiry and has yet to be replaced.

"The disappearance of this permanent channel of communication (with Washington) is a grave loss caused by the impeachment process," Mr Prystaiko said. 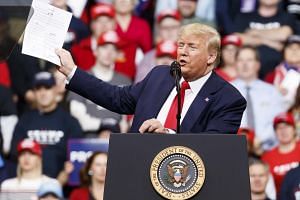 Treat us like something between a telco and a newspaper, says Facebook's Mark Zuckerberg

Mr Volker himself, who was also in Munich, sought to reassure Ukraine that Washington remains committed to its ally.

"US policy and US commitment to Ukraine is as strong as ever," he told AFP.

Mr Trump's troubles were "a domestic political issue", he said, and have "nothing to do with Ukraine".

Mr Zelensky has been at pains to stay on the sidelines of the American controversy, careful not be seen to be siding with either the Democrats or the Republicans.

Washington's diplomatic, financial and military support is crucial to Kiev as it remains locked in conflict with Moscow following Russia's 2014 annexation of Crimea and its support for pro-Russian separatists in eastern Ukraine.