Four years after her baby was decapitated as she was giving birth, Ms Laura Gallazzi can still remember the horrifying incident.

Speaking with BBC Radio on Wednesday (Sept 26) as part of a campaign to secure new legal rights for unborn children, Ms Gallazzi said she had been just over 25 weeks pregnant when the incident occurred in March 2014.

When her water broke, she went to a hospital in Dundee, Scotland, where medics prepared her for a premature birth.

"I was told my baby was okay... there was no major cause for concern," she said.

However, after she visited the washroom, her baby's umbilical cord emerged from her womb.

"I started screaming, panicking and shouting, hitting the buzzer and all these midwives came in," said Ms Gallazzi.

She was then taken to a hospital room, where things started to go wrong. 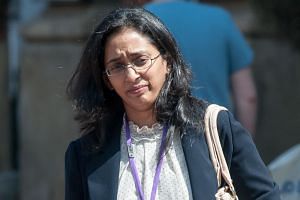 Ms Gallazzi shared that she had earlier been told that she would likely have a caesarean section delivery as her baby was in the breech position, head up rather than facing the birth canal.

However, the doctor told her to "push" instead.

Ms Gallazzi said: "The doctor said 'push' - and I'm thinking to myself no, I'm not in labour, I don't feel like I need to push.

She said that she attempted to crawl up the bed to get away from the doctor, but was pulled back down.

Suddenly, she felt a "pop".

She said: "I didn't hear him cry, but I wasn't too worried about that because I knew he was so small. Then the room went into absolute chaos.

"People were rushing about. There was a guy who tried to go out the room."

Ms Gallazzi said she was told to "push again", which confused her as she believed she had already delivered her baby.

The worst was yet to come, however, as she was told that her son's head was still inside her body, and she would need to undergo a caesarean section to retrieve it.

Afterwards, a doctor reattached the baby's head to his body and told Ms Gallazzi that the baby had been "fixed". She was then allowed to cradle her baby's body, which was placed inside a basket.

Ms Gallazzi later had her baby cremated, and placed his ashes inside a teddy bear so she could cuddle it.

A later hearing by the British Medical Practitioners Tribunal Service in Manchester found that the doctor who had decapitated the baby was nearing the end of a 24-hour split shift when she was called to attend to Ms Gallazzi.

The hearing ruled that the doctor's decision to attempt a vaginal delivery rather than a caesarean section was mistaken.

A later tribunal ruled that the doctor was fit to practise, and was allowed to return to work.

Ms Gallazzi said that during the course of investigations, she was told that, as her baby had not taken a breath, he had no legal persona in Scotland.

This meant that there could be no criminal action or fatal accident inquiry into her baby's death.

Moved by how unfair she felt the situation was, Ms Gallazzi decided to launch a petition calling for a change in the law that would give stillborn babies a legal identity.

"I'm just trying to get as many signatures as possible so this law can be looked at," she told BBC Radio.