A 29-year-old man who allegedly stabbed three people with a knife in a London Tube station last Saturday (Dec 5) has become the target of a Twitter hashtag campaign.

#YouAintNoMuslimBruv first topped the trending chat in Twitter in the aftermath of the incident at Leytonstone underground station, before catching on with users across the world. 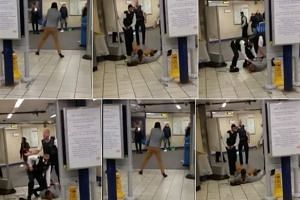 The attacker had allegedly cried "This is for Syria" and started his stabbing spree, before being subdued by a police officer with a Taser.

The British police said the attack, which left one man seriously injured and another with minor injuries, has been classified as a terrorism incident.

According to the BBC, the first tweets containing the hashtag appeared not long after the video of the stabbings emerged on social media.

To the eyewitness who shouted #YouAintNoMuslimBruv, he spoke for millions of British voices and got the point across directly in 1 moment.

A quintessentially London way to respond to a violent terrorist. 👏 #youaintnomuslimbruv pic.twitter.com/JCdo45f6dh #Leytonstone

The hashtag follows in the footsteps of similar messages on Twitter meant to express defiance and solidarity in the wake of terrorist attacks.