LONDON (BLOOMBERG) - President Donald Trump said trade between the US and UK could as much as triple if the two countries strike a deal after Britain leaves the European Union.

"As the UK makes preparations to exit the European Union, the United States is committed to a phenomenal trade deal between the US and the UK," Mr Trump said on Tuesday (June 4) in London during a news conference with British Prime Minister Theresa May.

"There is tremendous potential in that trade deal. I say probably two or even three times of what we're doing right now."

Mr Trump has advocated for the UK to leave the European Union and aligned himself with some of its staunchest Brexit advocates.

Earlier on Tuesday, he told Mrs May and a group of executives that he sees "a very, very substantial trade deal" between the US and UK once it leaves the EU.

Mrs May also endorsed a US trade deal.

"Mr President, you and I agreed the first time we met that we should aim for an ambitious free trade agreement when the UK leaves the EU," she said. "And from our positive discussions today, I know that we both remain committed to this." 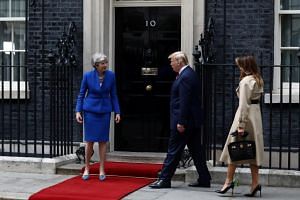 Trump says Theresa May should 'stick around' for the great US-British trade deal, but she'll be gone by July

But the two leaders also indicated there would be conflicts in any trade negotiations.

Mr Trump, echoing other US officials, said that "everything will be on the table" in negotiations - including the UK's cherished National Health Service, which sets prices and pays for hospitals, drugs and other medical care in the country.

Mrs May responded: "The point about making trade deals is of course that both sides negotiate and come to an agreement about what should or should not be in that trade deal for the future."

Mr Trump's comments on Brexit echoed his tweet on Monday - the first day of his state visit to the UK - when he dangled the prospect of a "big trade deal" once the "UK gets rid of the shackles".

The White House also released a statement on Monday saying Mr Trump "supports Brexit being accomplished in a way that will not affect global economic and financial stability while also securing independence to the United Kingdom".

Asked whether the UK should exit the EU by the end of October, with or without a deal with the rest of Europe, Mr Trump said: "I think it will happen, and I believe the Prime Minister's brought it to a very good point where something will take place in the not too distant future."

He and Mrs May also joked about Mr Trump's advice that the UK should have sued the EU over Brexit terms.

"We didn't sue. We went into negotiations and came out with a good deal," Mrs May said, though Parliament rejected it.