The Trump administration has been engaged in a combative global campaign for months to keep Huawei products out of future 5G broadband networks, including threats to curb intelligence-sharing with allies if they do not comply.

The US alleges that China could use Huawei equipment for spying, a charge the company's executives have repeatedly denied.

Mr Trump had the opportunity during meetings with leaders of Britain and Ireland this week to badger them about Huawei and amplify his administration's threats.

Instead, he has taken a more cooperative approach.

"We deal very closely with - as you know - with your intelligence and your security and we're working on that together. And I know you're concerned like we're concerned, we're all concerned about it," Mr Trump told Irish Prime Minister Leo Varadkar on Wednesday (June 5) at Shannon Airport.

"We're working on it together very much with not only Europe but with Ireland." 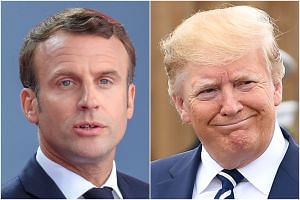 After a meeting with British Prime Minister Theresa May a day earlier, he dismissed the idea of cutting Britain off from US intelligence-gathering.

"We have an incredible intelligence relationship and we will be able to work out any differences," Mr Trump said in a joint news conference with Mrs May.

"I see absolutely no limitations. We've never had limitations. This is a truly great ally and partner, and we'll have no problem with that."

Asked directly whether he was prepared to curb information sharing if Britain placed no restrictions on Huawei, Mr Trump answered: "No... Because we're going to have, absolutely, an agreement on Huawei and everything else."

US Secretary of State Michael Pompeo, who joined Mr Trump in Britain, has essentially played "bad cop" in Europe. Before Mr Trump's trip, Mr Pompeo said during a visit to Germany that the US may have to change its "behaviour" regarding intelligence sharing.

It echoed a warning Mr Pompeo made in April to Nato allies.

"We've made clear that if the risk exceeds the threshold for the United States, we simply won't be able to share that information any longer," he told reporters after meeting counterparts from the North Atlantic Treaty Organisation in Washington.

Mrs May's spokesman told reporters earlier on Tuesday that the government is still reviewing its policy on Huawei and will make a decision based on "hard-headed technical assessments".

Mr Trump has been less understanding towards China and Huawei itself. His administration is seeking to choke off the company's access to vital US components, requiring its American vendors to seek US government permission to do business with the company.

The issue has become entangled in Mr Trump's trade war with China, particularly after the US President suggested the company's fate could be addressed in a deal to resolve economic disputes. 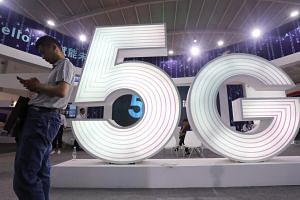 China has recently taken recent punitive actions towards US companies including FedEx and Ford Motor that analysts have regarded as retribution for Mr Trump's trade policy and his administration's moves against Huawei.

Trade came up during Mr Trump's brief visit to Ireland. At a press conference, Mr Varadkar was quick to tell the American President that his government was anxious to avoid a physical border as a result of Brexit, after Mr Trump told him it "will all work out with your wall".

At the moment, there is no visible border on the island of Ireland - a situation a hard-Brexit threatens.