BRUSSELS (AFP, REUTERS, WASHINGTON POST) - US President Donald Trump accused Germany of being a “captive” of Russia on Wednesday (July 11) as Western leaders gathered in Brussels for a Nato summit where Trump wants Europeans to pay up more for their own defence.

In a startling public outburst, Trump told Nato secretary-general Jens Stoltenberg that Germany was wrong to support a new US$11-billion Baltic Sea pipeline to import Russian gas while being slow to meet targets for contributing to Nato defence spending that was intended to protect Europe from Russia.

“We’re supposed to be guarding against Russia, and Germany goes out and pays billions and billions of dollars a year to Russia,” Trump said in the presence of reporters at a pre-summit meeting at the residence of the US ambassador to Belgium. His comments appeared to substantially overstate German reliance on Russian energy and to imply the German government was funding the pipeline, which is a commercial venture.

The Washington Post reported that Stoltenberg – a mild-mannered former Norwegian prime minister who has cultivated a positive relationship with Trump – appeared reduced to spluttering as Trump cut him off after he started to explain that allies traded with Russia even during the Cold War.

Earlier in the exchange, Trump had demanded credit from Stoltenberg for forcing an increase of Nato defence budgets.

It was "because of your leadership”, Stoltenberg told Trump.

Budget increases started after Russia’s 2014 annexation of Ukraine’s Crimean Peninsula, and they have accelerated in the Trump era in response to the US president’s criticism.

“We’re supposed to protect Germany but they’re getting their energy from Russia,” Trump told Stoltenberg, as aides on both the US and Nato side of a long table shifted in their seats and sat stonefaced.

Chief of Staff John Kelly jerked his head away, the Post reported, as US Ambassador to Nato Kay Bailey Hutchison looked up at the ceiling.

“So explain that,” Trump said. “And it can’t be explained and you know that.”

Trump’s criticism set off immediate anxiety in Germany. Munich’s Süddeutsche Zeitung headlined its story: “It is not only bad, it is catastrophic.”

Germany’s energy relationship with Russia has long frustrated Washington and Eastern Europe, who fear that the Nordstream pipeline that bypasses the Baltic nations and Poland could be used to cut them off from crucial energy supplies. Former German chancellor Gerhard Schroeder is a top executive at the Russian-government-controlled company that runs the Nordstream pipeline.

With tensions in the Western defence alliance already running high over Trump’s demands for more contributions to ease the burden on US taxpayers, and a nationalistic stance that has seen trade disputes threaten economic growth in Europe, the latest remarks will fuel concerns among allies over the US role in keeping the peace that has reigned since World War II. 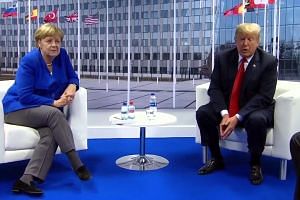 After the two-day summit in Brussels, Trump will meet Russian President Vladimir Putin in Helsinki on Monday.

German Defence Minister Ursula von der Leyen hit back at Trump’s remarks: “We have a lot of issues with Russia without any doubt,” she told reporters in English. “On the other hand, you should keep the communication line between countries or alliances and opponents without any question.”

Stoltenberg later told reporters that Trump had used “very direct language” but that all Nato allies were agreed that the cost of defence spending must be spread around and that last year had seen the biggest increase in a generation.

“Despite disagreements, I expect that we will agree on the fundamentals that we are stronger together than apart,” he said.

Trump said Germany’s closure of coal and nuclear power plants on environmental grounds had increased its dependence, like much of the rest of Europe, on Russian gas.

German Chancellor Angela Merkel, who meets Trump at the summit, has given political backing to the Nord Stream 2 pipeline to import more gas, despite criticism from other EU governments.

However, Berlin insists it is a privately funded commercial project with no input of public money.

However, his comment that “Germany is totally controlled by Russia because they are getting 60 to 70 per cent of their energy from Russia and a new pipeline” appeared to mis-state German energy use – about 20 per cent of which is accounted for by oil and gas imports from Russia.

Trump also renewed his call for other Nato allies, including Germany, to “step it up” and pay more to the Western alliance after years in which US taxpayers have, he said, borne an“unfair” share of military spending.

“They have to step it up immediately. Germany is a rich country, they talk about increasing it a tiny bit by 2030. Well they could increase it immediately, tomorrow, and have no problem,” Trump said.