PARIS (REUTERS)  – The Islamist gunmen who attacked the satirical magazine Charlie Hebdo five years ago, killing 12 people, sought to avenge the Prophet Muhammad, a French court heard on Wednesday (Sept 2) on the first day of the trial of more than a dozen alleged accomplices.

They paused to ensure then-editor Stephane Charbonnier was among the dead, the presiding judge said in a precis of the prosecution’s case.

Al-Qaeda’s Yemeni affiliate praised the Kouachi brothers for “killing those who are among the worst enemies of the Prophet, and of Islam,” said Regis de Jorna, the presiding judge.

A third attacker, Amedy Coulibaly, killed a police woman and then four Jewish hostages in a kosher supermarket in a Paris suburb.

Like the Kouachis, Coulibaly was killed in a shootout with police.

The trial reopens one of modern France’s darkest episodes.

The attack began three days of bloodshed in Paris and marked the onset of a wave of Islamist violence that killed scores more.

France’s anti-terror prosecutor, Jean-Francois Ricard, said this week the absence in the dock of the attackers would bring frustration to the families of those killed and other victims, but that the trial a chance to express pent-up emotion.

Prime Minister Jean Castex tweeted: “Always Charlie”, evoking the slogan #JeSuisCharlie – I am Charlie – that became a unifying cry after the attacks. 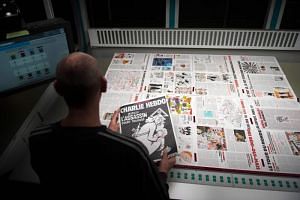 In a rare move, the proceedings, due to last 10 weeks, will be recorded.

Police wearing balaclavas led 11 of the 14 suspects into the courtroom and the defendants told the presiding judge they would answer the court’s questions.

Three others are being tried in absentia. Hayat Boumedienne, Coulibaly’s partner at the time of the attacks, and brothers Mohamed and Mehdi Belhoucine, travelled to areas of Syria under Islamic State in Iraq and Syria (ISIS) control days before the attacks and may be dead.

The defendants face charges ranging from supplying weapons and logistical help to financing terrorism and membership of a terrorist organisation. No plea is entered under the French legal system.

'WE WILL NEVER LIE DOWN'

More than 250 people have been killed in France in Islamist violence since the attacks, which laid bare France’s struggle to counter the threat of militants brought up in the country and foreign extremists.

Charlie Hebdo, which has long tested the limits of what society will accept in the name of free speech, on Wednesday re-printed the cartoons that stirred outrage in the Muslim world when they were first published by a Danish newspaper in 2005.

“We will never lie down. We will never give up,” Sourisseau wrote, explaining the decision to re-publish the cartoons.

Charlie Hebdo’s no-taboo journalism divides France. For Muslims, any depiction of the Prophet is blasphemous.

“Charlie Hebdo... puts them all in one box.”

President Emmanuel Macron said the freedom to blaspheme went hand in hand with the freedom of belief in France.

“Satire is not a discourse of hate,” he said.