LONDON (REUTERS) - British Prime Minister Theresa May’s final Brexit gambit was in tatters on Wednesday (May 22) just hours after her offer of a vote on a second referendum and closer trading arrangements failed to win over either opposition lawmakers or many in her own party.

Nearly three years since Britain voted 52 per cent to 48 per cent to leave the European Union, Mrs May is trying one last time to get her divorce deal approved by the British parliament before her crisis-riven premiership ends.

Mrs May on Tuesday (May 21) appealed to lawmakers to get behind her deal, offering the prospect of a possible second referendum on the agreement and closer trading arrangements with the EU as incentives.

Conservative and Labour lawmakers lined up to criticise Mrs May’s Withdrawal Agreement Bill, or WAB, legislation which implements the terms of Britain’s departure. Some upped efforts to oust her.

“We are being asked to vote for a customs union and a second referendum,” Mr Boris Johnson, the bookies favourite to be Britain’s next prime minister, said.

“The Bill is directly against our manifesto – and I will not vote for it. We can and must do better – and deliver what the people voted for,” he said.

The deadlock in London means it is unclear how, when or even if Britain will leave the European club it joined in 1973. The current deadline to leave is Oct. 31. 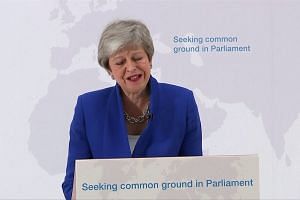 Britain’s labyrinthine crisis over Brexit has stunned allies and foes alike, and with deadlock in London, the world’s fifth largest economy faces an array of options including an exit with a deal to smooth the transition, a no-deal exit, an election or a second referendum.

As Britain headed again into Brexit turmoil, US investment bank JPMorgan raised its probability of a no-deal Brexit to 25 per cent from 15 per cent, saying its base case was that Mr Johnson would become prime minister followed by a general election.

Labour leader Jeremy Corbyn said his party could not vote for the Withdrawal Bill, describing Mrs May’s new offer as “largely a rehash of the government’s position” in talks with the opposition that broke down last week.

“It’s already pretty clear that it’s heading for a pretty big loss and I think frankly the prime minister would do well to just admit defeat and I think she should announce today that she’s not going to put the vote because it’s clearly heading in the wrong direction.”

Mrs May wrote to Mr Corbyn, asking him to compromise so that Brexit could take place.

“I have shown today that I am willing to compromise to deliver Brexit for the British people,” Mrs May wrote.

“The WA is our last chance to do so,” Mrs May said.

“I ask you to compromise too so that we can deliver what both our parties promised in our manifestos and restore faith in our politics,” she said.

May’s latest offer has enraged eurosceptics opposed to a second referendum, and fails to go far enough for those who want to give the public another say in the hope of stopping Brexit altogether.

“There is one last chance to get it right and leave in an orderly fashion. But it is now time for Prime Minister Theresa May to go – and without delay,” said Conservative lawmaker Tom Tugendhat, chairman of parliament’s Foreign Affairs Select Committee.

“She must announce her resignation after Thursday’s European (Parliament) elections,” he wrote in the Financial Times.

Even some of her ministers criticised the pitch, one source close to the cabinet said, explaining that they felt the concessions had gone much further than they had agreed at a meeting on Tuesday. Another source said May had cancelled meetings with senior cabinet colleagues on Wednesday evening.

Northern Ireland’s Democratic Unionist Party, which props up Mrs May’s minority government, said the “fatal flaws” of her original deal remained. They fear the divorce deal could see Northern Ireland split from the rest of the United Kingdom.

Such is the discord that some Conservative Party lawmakers have begun a new push to oust her even earlier so that she doesn’t have the chance to put her Brexit plan to a vote in parliament, the BBC’s political editor Laura Kuenssberg said.

May stood firm during more than two hours of questions in parliament, urging lawmakers to back the bill and then have a chance to make changes to it, so they can have more control over the final shape of Brexit.

“In time another prime minister will be standing at this despatch box,” May said, acknowledging that her leadership was drawing to a close.

“But while I am here, I have a duty to be clear with the House (of Commons) about the facts. If we are going to deliver Brexit in this parliament we are going to have to pass a Withdrawal Agreement Bill,” she told MPs.

May has so far fended off attempts to oust her by promising to set out a departure timetable once parliament has had a chance to vote on the legislation.

Asked by eurosceptic lawmaker Jacob Rees-Mogg whether she really believed in the new deal she had proposed or whether she was simply going through the motions, May said: “I don’t think I would have been standing here at the despatch box and be in receipt of some of the comments I have been in receipt of from colleagues on my own side and across the house if I didn’t believe in what I was doing.”

Britain’s marathon crisis over Brexit has stunned allies and foes alike. With the deadlock in London, the world’s fifth-largest economy faces an array of options including an exit with a deal to smooth the transition, a no-deal exit, an election, a second referendum, or even revocation of the Article 50 notice to leave the EU.

The pound was on track for its longest-ever losing streak against the euro as some traders said they saw the rising chance of a no-deal Brexit. Those fears pushed investors into the relative safety of government bonds – particularly those that offer protection against a spike in inflation.

There were some signs of support for May in parliament, but swathes of empty Conservative benches during Wednesday’s debate underlined the fact that many of her fiercest critics had decided to stay away.

“The proposed second reading of the WAB is clearly doomed to failure so there really is no point wasting any more time on the prime minister’s forlorn hope of salvation,” Andrew Bridgen, a Conservative lawmaker, told Reuters. “She’s got to go.” More Conservative lawmakers handed over letters to the 1922 Committee, a Conservative group that can make or break party leaders, to demand a no-confidence vote in May.

Asked about the pressure to resign, her spokesman said: “The PM is focused on the job in hand and what the last 24 hours or so have proved, it is a big one.”