LONDON (BLOOMBERG) - A deadly pig virus is spreading further in eastern Europe as the region struggles to contain a long-running outbreak of the disease.

Serbia has reported its first suspected cases of African swine fever, just weeks after Slovakia said it had found the disease in a backyard herd.

There has also been a "distinct increase" in cases reported on pig farms in nations already affected, including Romania, Poland and Bulgaria, according to data compiled by the British government.

Eastern Europe has been battling to control the virus since it first spread from Russia in 2014. While most affected countries in the region are not major pork producers, they remain in close proximity to key exporters further west. African swine fever has leaped into the global spotlight, as China - home to half the world's hogs - and other Asian nations lost millions of pigs from outbreaks that began a year ago.

"The outbreak situation in eastern member states remains pressing," Rabobank analysts said in a July report. Risks of the disease's spread have spurred "pessimism" among producers in northern Europe and discouraged herd expansion.

Western Europe has largely remained free of the disease, other than detections in wild boar in Belgium since 2018. That's helped the region remain a top exporter to supply the world's growing pork shortage, with European Union shipments to China climbing 43 pre cent this year through May.

Still, importers are keeping a close eye on the issue. Though Germany - one of Europe's top producers - is free of the virus, the Philippines recently banned its pork, claiming a shipment was mixed with Polish supply. 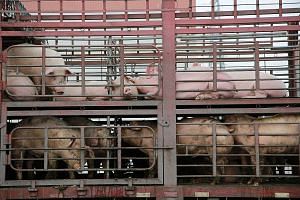 Romania has reported 746 outbreaks spread across more than half the country, up from 581 at the start of August, according to its veterinary agency. Recent findings in Poland, the EU's fourth-largest pork producer, include a farm of 9,400 pigs, the latest OIE report shows.

Serbia has euthanised a few dozen pigs in the central part of the country after finding suspected cases and is awaiting laboratory test results this week, according to a spokesperson for the agriculture ministry. In Bulgaria, there have been six recent cases at industrial farms, and about 126,000 pigs will be culled in the nation, the state food agency data show.