STOCKHOLM (REUTERS, BLOOMBERG) - Sweden's state prosecutor said on Monday (May 13) she would reopen a rape investigation involving WikiLeaks founder Julian Assange and that circumstances now existed to seek his extradition from Britain.

Eva-Marie Persson told a news conference prosecutors would continue and conclude a preliminary investigation that was dropped in 2017 without charges being brought as Assange had taken refuge in the Ecuadorean embassy in London.

Assange was arrested in Britain last month after spending seven years inside the embassy. The United States is also seeking his extradition on charges relating to the public release by Wikileaks of a huge cache of secret documents.

The intervention will likely complicate the US government’s attempt to extradite the 47-year-old Australian from Britain to face charges that he helped hack into military computers.

If Sweden requests Assange’s extradition from the UK, Home Secretary Sajid Javid would choose which request – Sweden’s, or America’s, to address first. He would have to weigh factors including the seriousness of the offences and the date each warrant was issued, according to UK extradition law.

Assange is serving a 50-week sentence in a UK jail for skipping bail, and any extradition would only take place once that ends.

Sweden issued an arrest warrant for Assange in 2010. He fought the extradition up to the UK Supreme Court, where he lost in 2012. While he was out on bail, Assange sought asylum in Ecuador’s embassy and as the years dragged on, Swedish prosecutors dropped the investigation because it had become impossible to pursue the probe in his absence. 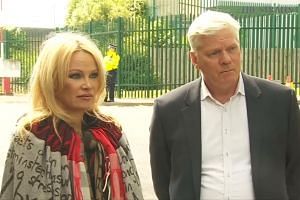 Assange was arrested by British police in April after being expelled from the embassy, and the woman who made the allegations asked that the prosecutors resume the rape investigation.

A UK lawyer for Assange directed comments to his Swedish attorney.  The original rape probe related to the allegations of two women, one of whom said Assange failed to use a condom while another said he had sex with her while she was asleep. The women, both supporters of WikiLeaks, let Assange stay at their homes during a speaking tour in Sweden in 2010.  Most of the claims had expired due to the statute of limitations, but the rape allegation is not yet time barred. Its statute of limitations will expire in 2020.