PARIS (AFP) - The Eiffel Tower was turning away tourists for a second day on Thursday (Aug 2) as workers pressed a strike over a new access policy which they say is causing unacceptably long wait times for visitors.

The monument has been closed since Wednesday afternoon as unions locked horns with management over a decision to assign separate elevators to visitors with pre-booked tickets and those who buy them on site.

At the same time, the tower now sets aside half of daily tickets for Internet customers, up from just 20 per cent previously.

Workers say the changes have resulted in lopsided queues that can extend to three hours for those waiting to pay for tickets, and up to an hour for Internet customers who are supposed to have reserved time slots.

They want more flexibility in managing the thousands hoping to reach the top of the "Iron Lady" each day during the peak summer tourist season.

"We may or may not come again, because we spent so much money," a tourist who gave her name only as Hema told AFP on Wednesday.

"It's not nice, for whatever reason they have the strike for, it's an injustice to visitors," said Hema, who was visiting with her husband and two teenaged children. 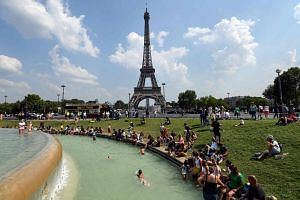 Negotiations dragged on well into Wednesday night and resumed early Thursday, when workers were supposed to vote on a proposal offered by the site's operator SETE, which is majority owned by the city of Paris.

"The SETE is well aware of the disappointment for visitors because of the monument's closure, and its negative impact on the image of both the city and country," the company said in a statement Wednesday.

The tower's 300-strong staff has staged strikes repeatedly in recent years over issues including pickpocketing and maintenance work.

It is one of the most popular tourist attractions in the world, drawing more than six million people each year.