LONDON (WASHINGTON POST) - Stephen Hawking says he no longer feels welcome in the United States, now that President Donald Trump is in power.

The renowned scientist and theoretical physicist spoke on Monday (March 20) on ITV's Good Morning Britain about his views on artificial intelligence, climate change and Trump - whom he once called a demagogue.

"The reaction to the election of Donald Trump may have been overdone, but it represents a definite swing to a right-wing, more authoritarian approach," Hawking said about the negative response to Trump's election.

Of the United States, he said: "I have many friends and colleagues there, and it is still a place I like and admire in many ways. But I fear that I may not be welcome."

Leading up to the US presidential election, Hawking was cheekily asked on Good Morning Britain whether he could explain Trump's rise to presidential candidacy.

"I can't," Hawking said last May. "He's a demagogue who seems to appeal to the lowest common denominator."

Asked now about that statement, Hawking elaborated on Trump's victory and his first two months in office. 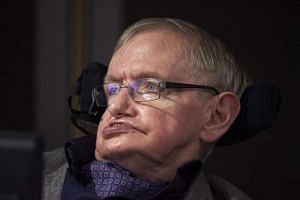 "Trump was elected by people who felt disenfranchised by the governing elite in a revolt against globalisation," Hawking said on Monday. "His priority will be to satisfy his electorate, who are neither liberal nor that well-informed. We have already seen this in the promise to build a wall along the Mexican border and the sanctioning of two oil pipelines and the appointment to the Environmental Protection Agency of Scott Pruitt, a man who does not believe carbon dioxide causes climate change."

When the British journalist Piers Morgan then asked what he most wanted to say to Trump, Hawking said he would tell the president that Pruitt should be replaced as the EPA chief, adding that "climate change is one of the great dangers we face, and it's one we can prevent".

Hawking also expressed concerns about Trump's travel ban, calling it "inefficient" and explaining how it should be done.

"His travel ban brands as Islamic State terrorists all citizens of six mainly Muslim countries, but not including America's allies such as Iraq, Saudi Arabia and Qatar, which allegedly help finance Islamic State," he said. "This blanket ban is inefficient and prevents America recruiting skilled people from these countries. To be effective, it should be replaced by a more selective, intelligence-based approach.

"But again, I fear this may not happen, as Trump continues to appease his electorate."

During the 11-minute interview, Hawking was asked for his opinion on a wide range of topics, including the true meaning of life, gender equality and artificial intelligence, a topic about which he has expressed grave concerns.

"Ever since the start of the industrial revolution, there have been fears of mass unemployment, as machines replaced humans," he said. "Instead, a demand for goods and services has risen in line with the increased capabilities. Whether this can continue indefinitely is an open question, but there is a greater danger from artificial intelligence if we allow it to become self-designing, for then it can improve itself rapidly, and we may lose control."

Hawking called himself a feminist, saying: "I have always supported women's rights."

Morgan brought up Britain's most powerful people - many of whom are women, including Queen Elizabeth, Prime Minister Theresa May, politicians Nicola Sturgeon and Amber Rudd, and Cressida Dick, commissioner of the Metropolitan Police Service.

Morgan asked Hawking whether this was scientific evidence of gender equality.

"It is not scientific proof of gender equality that is required, but general acceptance that women are at least the equals of men or better. This is coming," Hawking replied. "If we factor in high-powered women in Europe as well, such as Angela Merkel, it seems we are witnessing a seismic shift for women to accede to high-level positions in politics and society. But there may still be a gap between those women achieving high public status and those in the private sector. I welcome these signs of women's liberation."

And he talked about his ambitions, saying he would be thrilled to one day travel in space.

"I have already completed a zero-gravity flight, which allowed me to float weightless, but my ultimate ambition is to fly into space," Hawking said. "I thought no one would take me, but Richard Branson has offered me a seat on Virgin Galactic, and I said yes immediately. Since that day, I have never changed my mind."

But when asked perhaps the most obvious question - whether Hawking agrees with many others that he may indeed be the most intelligent person alive - he said, "I would never claim this."

"People who boast about their IQ are losers," he added.