LONDON (NYTIMES) - Dozens of new cases of the Omicron variant were reported in Britain and Denmark on Sunday (Dec 5), adding to increases across Europe and fuelling fears that the virus has already spread widely.

The coronavirus variant has spread to at least 45 nations worldwide, with the United States and much of Europe reporting a number of new cases in recent days.

With cases of Omicron now growing worldwide, the prospects of even more stringent restrictions are looming over a holiday period that many had hoped would be a return to some normalcy.

In Denmark, local health authorities confirmed there were 183 known cases of the variant, more than triple the total number of suspected cases reported last Friday, and called them worrying.

Both Britain and Denmark are widely perceived as leaders in genomic sequencing and testing, giving them an edge over tracking the spread of the virus and its mutations. Still, much remains unknown about the Omicron variant.

Part of the increase may be explained by the new laser focus of public health officials on the variant, which early evidence suggests may spread more quickly than the Delta variant.

Dr Peter Hotez, dean of the National School of Tropical Medicine at Baylor College of Medicine, said that the known numbers were so small that it was hard to know how much to make of the increase.

In parts of the US, health officials have also seen a steady climb in the number of Omicron cases. The variant has been detected in at least 16 states.

The Omicron variant was first identified in southern Africa in late November. On Saturday, Zambia became the latest African country - alongside South Africa, Botswana, Nigeria and Ghana - to report cases.

The detection of more Omicron cases adds to growing anxiety as overall coronavirus infections continue to increase in Europe, which the World Health Organisation called the epicentre of the pandemic earlier this month.

Since then, countries in the region have reimposed restrictions to clamp down on the resurgence of cases, with some tightening rules specifically for the unvaccinated.

On Sunday, officials in Britain said they were still gauging the potential effect of the new variant. But increasing the uptake of vaccines and boosters would be the surest defence, Britain's Deputy Prime Minister Dominic Raab told the BBC.

More On This Topic
How two flights to Europe may have spurred spread of Omicron variant
As attention shifts to Omicron, the Delta variant overwhelms Europe

Britain reported an average of 44,385 daily cases last week, an 11 per cent increase compared with two weeks ago. Deaths, in contrast, have fallen by 20 per cent in that timeframe.

Britain levied new restrictions last week to combat Omicron, including a requirement that all international travellers take a coronavirus test within 48 hours of departure and an additional test within two days after arriving.

The government also mandated the wearing of masks in indoor spaces such as public transport and shopping centres.

More On This Topic
Omicron variant found in nearly one-third of US states
Omicron mutations signal Covid-19 vaccine evasion, but unlikely to cause more severe illness

In Denmark, where vaccination rates are high, the mandatory use of Covid-19 passports and face masks in some public spaces was reintroduced last week. The country's health authority said on Sunday that it was ramping up its laboratories to be able to detect Omicron faster, as well as intensively testing and restricting travel to try to delay the spread of the virus.

Belgium is requiring people to work from home and ordered schools closed a week earlier for Christmas; Italy banned unvaccinated people from certain leisure activities; and Ireland has shuttered nightclubs and restricted gatherings.

Some countries have already seen pushback to the restrictions.

In Austria, tens of thousands marched in protest on Saturday for the second weekend in a row over the government's decision to impose a tough new lockdown and its plans for a vaccine mandate. 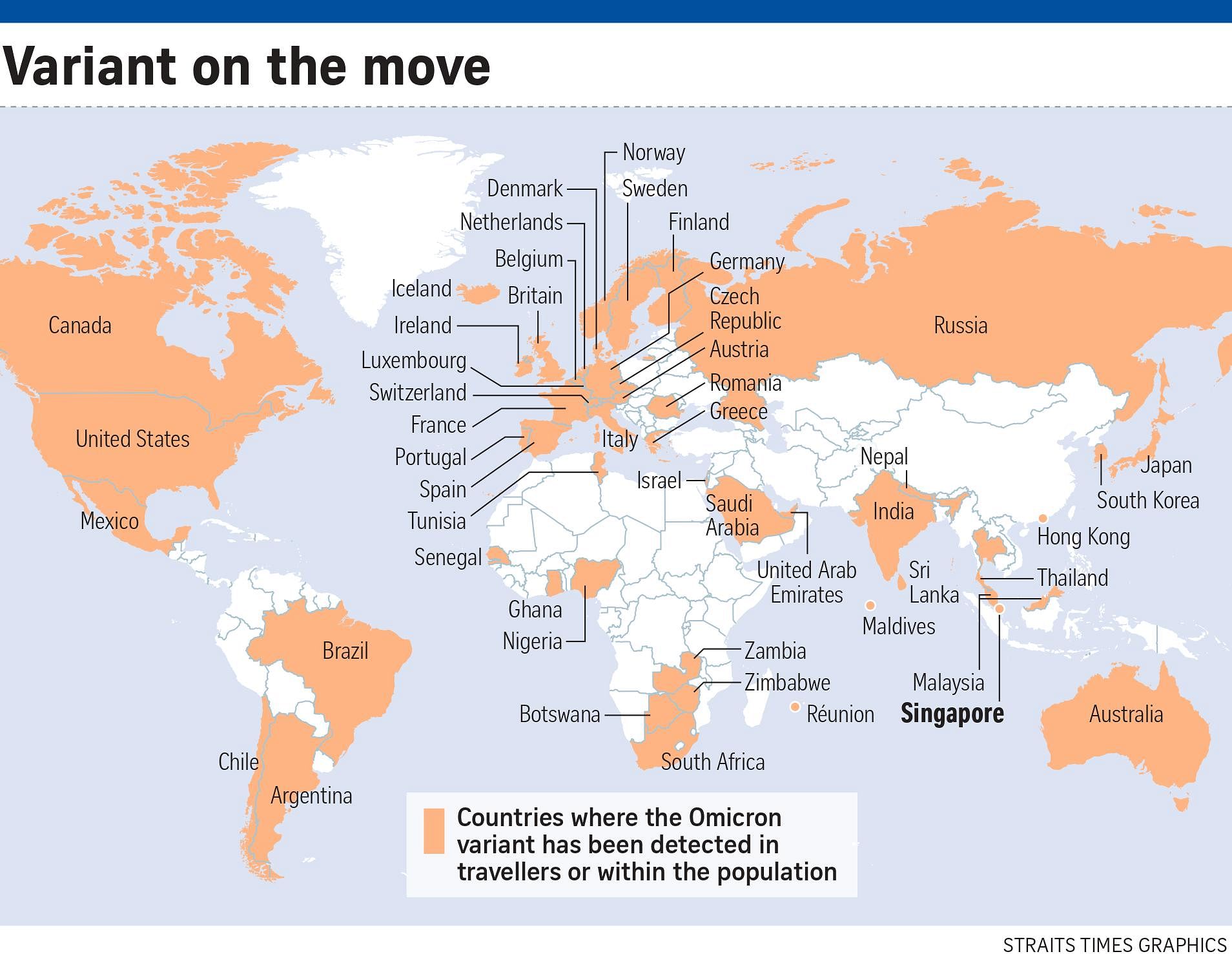