BARCELONA (AFP) – Catalan leaders came under intense domestic and international pressure Monday (Oct 9) to halt plans to break away from Spain after the region’s president repeated his threat to declare independence and the government warned it would act to block it.

The sides dug in as the clock ticked down to a Tuesday evening session in the regional parliament where separatists have called for an independence declaration, a plan that has raised concerns for stability in the European Union.

Political leaders urged Catalan separatists to back down and ease Spain’s worst political crisis in decades, with the leader of the opposition Socialists, Pedro Sanchez, urging them to “stop everything” and respect the law.  And France said that Catalan independence would not receive international recognition.

Hundreds of thousands of Spaniards rallied Sunday in a tide of red and yellow national flags in what is the worst upheaval since the country returned to democracy in the 1970s.  Tempers have worsened over the past week after national police cracked down on voters during a banned Oct 1 Catalan independence referendum. 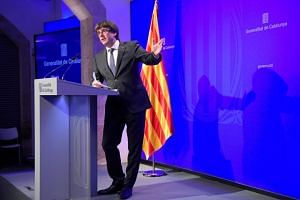 Regional president Carles Puigdemont said the vote justified secession and separatists urged him to declare independence in defiance of the central government and national courts.  Puigdemont hinted in an interview on Sunday that the region would go ahead with the declaration if Madrid continued to refuse dialogue.

“We have said yes to so many mediation options that have been proposed,” he told Catalan television channel TV3.  “The days are going by and if the Spanish state does not give a positive response, we will do what we set out to do.”

Such a move “will not go unanswered by the government,” Deputy Prime Minister Soraya Saenz de Santamaria warned on Monday, speaking on radio station COPE.  “If this gentleman unilaterally declares independence, measures will have to be taken.”

Prime Minister Mariano Rajoy at the weekend refused to rule out a constitutional manoeuvre to impose direct rule from Madrid.

Nathalie Loiseau, France’s minister for European affairs, warned Monday that “if there were a declaration of independence it would be unilateral and it wouldn’t be recognised.” “This crisis needs to be resolved through dialogue at all levels of Spanish politics,” she urged.

Merkel “affirmed her backing for the unity of Spain, and both sides exchanged views on ways in which internal Spanish dialogue can be boosted within the framework of the constitution,” said the chancellor’s spokesman Steffen Seibert.

Flag-waving demonstrators, calling themselves a “silent majority”, packed central Barcelona on Sunday to protest against the independence plan.  Around 350,000 people attended, municipal police said, while organisers put turnout at between 930,000 and 950,000.

Some protesters called for Puigdemont to go to jail for holding the independence vote. Others called for dialogue.  The standoff has raised concerns for stability in the European Union as it continues to grapple with Britain’s planned exit from the bloc.

On the eve of Sunday’s rally, Rajoy refused to rule out suspending Catalonia’s regional autonomy – a move that risks further unrest.  But Rajoy assured Catalan leaders that there “is still time” to backtrack and avoid the imposition of direct rule.

Kofi Annan, in his role as chairman of The Elders, a group of notable public figures formed in 2007 to promote peace, said “consultation and not confrontation” was needed.  “I urge the Spanish government and the regional government of Catalonia to renew their commitment to a resolution through dialogue,” the former UN chief added.

Recent opinion polls indicate that Catalans are split on independence, although regional leaders said police violence during the referendum turned many against Madrid.

With its own language and cultural traditions, demands for independence in Catalonia date back centuries but have surged during recent years of economic hardship.  Catalonia, a northeastern region about the size of Belgium, is home to 7.5 million people and accounts for a fifth of Spain’s economy.

The Catalan government on Friday published final results from the referendum indicating that 90 per cent of voters backed the proposal to break away from Spain.  Turnout was 43 per cent as Catalans who reject independence largely boycotted the poll.  The vote was not held according to official electoral standards as there were no regular voter lists, electoral commission or observers.