MADRID (REUTERS) - Spain sent back to Morocco on Thursday (Aug 23) 116 migrants who had stormed the border fence at its Ceuta enclave in North Africa the day before, a Spanish Interior Ministry spokesman said.

Hundreds had attempted to get over the highly fortified border on Wednesday, and 118 made it to Spanish soil.

Some of them threw a corrosive substance which left seven police officers with burns.

Police identified the entire group and gave them legal and medical help before starting the process of expelling them, which the migrants accepted, the spokesman said, adding two will be allowed to stay because they are minors.

The spokesman later added that the migrants had all been informed that they had the right to request asylum in Spain, but none accepted the offer to start the process.

Amnesty International criticised the approach, saying in a statement: "Due to the speed at which it is carried out, it is difficult to guarantee access to a personalised procedure with full guarantees."

The group said that in the short time available it was difficult to provide good legal assistance and interpreters, and adequately identify potential asylum seekers. 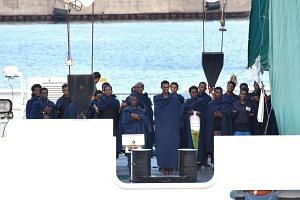 Footage from local broadcaster Faro TV showed men being escorted by Spanish police and officials in green uniforms onto a bus which then crossed the border back into Morocco.

Five of the group were injured in the jump over the fence, which is topped with razor wire. Thursday's footage showed two were visibly limping while another walked with crutches.

More than 3,800 migrants have crossed into Spain's territories on the Moroccan border so far this year, according to the UN refugee agency.

That accounts for 14 per cent of the total who arrived, mainly by sea, in Spain, making it the main destination for people seeking a better life in Europe.

Morocco agreed to take back the people under an agreement which dates from 1992 and under which Morocco must readmit citizens of third countries who have entered Spain illegally, if Spain requests this within 10 days of their arrival.

The spokesman said this provision has been used very rarely, and Morocco agreed to take them thanks to "good bilateral relations".

Previous Spanish governments have drawn criticism from human rights groups for allowing some migrants to be immediately turned back to Morocco without first seeking to identify them and offer assistance.

The rights groups argue that skipping the lengthier deportation procedures deprives people of the opportunity to claim asylum.

Last year, the European Court of Human Rights ruled that the immediate return of sub-Saharan migrants who attempted to cross the border into Melilla, the Spanish enclave east of Ceuta, amounted to a collective expulsion of foreign nationals and breached the European Convention on Human Rights.