MADRID (AFP) - Spain’s coronavirus death toll jumped by 738 overnight to exceed that of China, where the disease originated, as the country struggled to cope with an accelerating health crisis and another senior government minister was diagnosed with the virus.

With 3,434 fatalities, Spain now has the second highest number of deaths globally after Italy’s 6,820.

Nursing homes across the country have been overwhelmed by cases and a skating rink in Madrid has been turned into a makeshift morgue.

Police stood guard on Wednesday (March 25) outside the rink, normally a popular venue for children’s birthday parties, as hearses arrived at the building.

The government said Deputy Prime Minister Carmen Calvo had tested positive for coronavirus – the third Cabinet member to be infected – but was doing well.

Broad avenues in Madrid and Barcelona were virtually deserted, as were towns and villages across Spain, while fire engines and tractors sprayed disinfectant to clean streets.

Authorities began to carry out mass testing for public workers in a requisitioned fairground in Madrid, one of the worst-hit regions.

Spanish medical staff, who themselves account for thousands of infected cases, have taken out lawsuits against the government, complaining of the lack of basic protective equipment like masks, scrubs and gloves.

The government had ordered 432 million euros (S$680 million) worth of masks, gloves, testing kits and ventilators to be delivered over the next eight weeks, with the first large batch expected this week, Health Minister Salvador Illa said.

In an example of how companies are changing assembly lines to produce medical products, a shoe factory in northern Spain has switched to making simple protective masks – first for its own personnel and then for distribution. 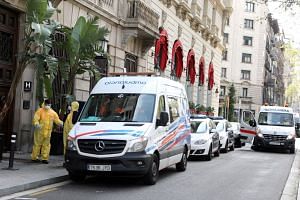 “Now we are working hard to... make something a little more sophisticated for it to reach medical use,” Basilio Garcia, chief executive of the Callaghan shoe factory, told Reuters.

Spain is on Day 11 of a 15-day nationwide lockdown which is likely to be extended to 30 days. Schools, bars, restaurants and most shops are shuttered. Social gatherings are banned. People are confined to their homes.

“We have achieved a near total reduction in social contact,” health emergency chief Fernando Simon told a news conference, adding that Spain was nearing the peak of the epidemic.

The number of coronavirus cases increased by a fifth overnight to 47,610 on Wednesday. The total number could be much higher as the government reported 130,000 sick leaves associated with the virus, encompassing workers who are either infected or in preventive isolation. The number does not include retirees.

Aside from the devastating health impact, the lockdown has dealt a punishing blow to the Spanish economy, with tens of thousands of workers temporarily laid off as sectors like retail, tourism and manufacturing grind to a halt. One of Spain’s biggest employers, El Corte Ingles, said it would temporarily lay off 22,000 workers at its department stores.

At Malaga airport in southern Spain, a gateway to the Costa del Sol tourist region, thousands of travellers waited for flights home, many sleeping on seats or on the floor.

The Bank of Spain said on Wednesday that there had been severe disruption on the economy since early March and a sharp contraction in consumer spending.