The Permanent Court of Arbitration (PCA) has been in the media spotlight because of the South China Sea case which the Philippines brought against China.

A ruling by a five-member arbitral tribunal was announced at the PCA on Tuesday (July 12).

Here are eight facts about the tribunal based in The Hague:

1. It is the world's oldest international tribunal 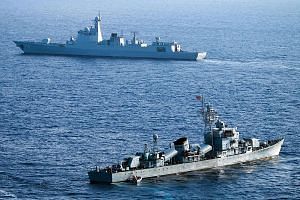 The inter-governmental organisation, which dedicates itself to resolving international disputes through arbitration and other peaceful means, was established in 1899 during the first Hague Peace Conference convened by Czar Nicholas II of Russia.

It refers to contracts, special agreements and various treaties such as those set up by the UN Commission on International Trade Law (Uncitral) and the UN Convention on the Law of the Sea (Unclos) to rule in disputes.

When diplomacy fails between two states, they may turn to arbitration via the PCA.

2.  It is not a court in the traditional sense

Instead of having judges to rule on issues, it consists of arbitral tribunals put together for each case. Hearings are not open to the public or press, unless both parties in the dispute agree.

Usually cases are settled on a pre-existing agreement - contained in a treaty or contract - that if a dispute arises, it will be resolved through arbitration.

3. A tribunal can have as many as five members

Once arbitration begins, an arbitral tribunal is appointed, consisting of one, three or five members.

For the South China Sea arbitration a five-member panel has been appointed led by Ghanian-born judge Thomas A. Mensah. The other members are Judge Jean-Pierre Cot, Judge Stanislaw Pawlak, Judge Rüdiger Wolfrum, and Professor Alfred H. A. Soons.

“An award from the tribunal that rejects some of China’s more dubious claims would provide support for the mainstream views of other states in the region. China is bound to comply with the award," Cecily Rose, assistant law professor of Public International Law at Leiden University told AFP.

"But should it refuse to do so, the tribunal has no enforcement mechanism to which it can turn."

All decisions, called "awards", are binding on all the parties in the dispute and have to be carried out without delay.

There are some post-award proceedings available to parties unhappy with the tribunal's decision, but they are limited, particularly in inter-state disputes.

Experts also say enforcement is often the "Achilles Heel" of public international law. However, states who ignore or disregard the PCA's ruling risk losing credibility and losing out in the so-called "court of world opinion".

The PCA has a permanent overseas presence in Mauritius and can conduct hearings all over the world. It also has facilities in Argentina, Costa Rica, Hong Kong and Singapore available for PCA-administered proceedings.

Cases taken up by the PCA span a range of legal issues involving territorial and maritime boundaries, sovereignty, human rights, international investment, as well as international and regional trade.

7. It has become more prolific in recent years

The PCA's arbitral tribunals have rendered more than 70 decisions in past cases and it currently considers 116 cases.

Recently-concluded cases include rulings in a bitter border dispute between Eritrea and Ethiopia and handing down an award in favour of the Indian Ocean nation of Mauritius in a fight with Britain over a marine protected area in the Chagos Archipelago.

In another case, it gave India a partial green light to build a hydro-electric project in the Kishenganga River after a dispute with Pakistan, who was worried about the project's impact on water supply further downstream.

8. The PCA is not the only option for settling territorial disputes

The International Court of Justice (ICJ), which is the primary judicial branch of the United Nations, has a history of settling disputes similar to the South China Sea case.

For instance, Singapore and Malaysia went to the ICJ over the ownership of Pedra Branca island, which sits at the eastern entrance of the Singapore Strait. The dispute started in 1979 over the publication of a map by Malaysia of its territorial waters and continental shelf, which included Pedra Branca in its territory. Singapore protested in 1980 and in 2003, Singapore and Malaysia signed a pact to refer the Pedra Branca dispute to ICJ. It included  the ownership of two nearby rocky outcrops, Middle Rocks and South Ledge as well. In May 2008, the ICJ awarded sovereignty over Pedra Branca to Singapore, Middle Rocks to Malaysia, and South Ledge to the state in whose territorial waters it is located.

Like the PCA, the ICJ is also located in the Peace Palace. ICJ rulings are enforceable by the United Nations Security Council, and are generally known to carry greater clout than arbitral awards.