ROME (AFP) - Despite a fraud conviction and sex scandal, Italy's 81-year-old former leader Silvio Berlusconi has one last political victory in his sights in general elections less than two weeks away.

Temporarily banned from returning to public office himself, the billionaire media mogul still hopes to influence the country's political direction by leading a right-wing coalition in the March 4 polls.

"I'm pretty confident of the result of the election and going to form a government with our centre-right allies," he told a rally of youth activists from his Forza Italia party in Rome on Wednesday (Feb 21), in a typically outspoken address.

"I can tell you how to stay young," he added. "I'll tell you the brand of my suppositories."

Berlusconi "wants to win one last time before retiring," his biographer Alan Friedman was quoted as saying by the Corriere della Sera newspaper.

The three-time former prime minister heads a coalition made up of Forza Italia and two far-right forces: the League and Brothers of Italy.

Recent opinion polls indicate the coalition has about 38 per cent support overall - the highest score out of Italy's three major electoral groupings.

But it falls short of a majority and surveys suggest millions of voters remain undecided.

Berlusconi is banned from public office due to a 2013 tax fraud conviction. He also faces charges that he bribed witnesses to lie at his earlier trial for paying for sex with a minor.

In spite of it all, he remains the leading figure of the Italian right almost a quarter of a century after first taking power. 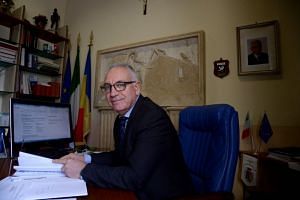 His own party has surged by eight points to 18 per cent support in the opinion polls in the past year.

Forza Italia's edge in the polls would give Berlusconi the upper hand in naming the coalition's pick for prime minister.

He and his coalition partners would field wildly different candidates, as they have little in common apart from a desire to win.

Berlusconi and the League's leader Matteo Salvini "can't stand each other," says Roberto D'Alimonte, director of the political science department at Luiss University in Rome.

First the coalition would need to win a working majority.

This year's election is the first under a complex electoral law introduced last year.

A mix of proportional representation and first-past-the-post, it enables a party or coalition to obtain a majority with around 40 to 45 per cent of the vote - which may be just out of the right-wing coalition's reach.

The coalition spans the range of Italian right-wing politics, from the pro-European conservative moderates within Forza Italia to former northern secessionists the League and Brothers of Italy, which has roots in post-war neo-fascism.

Together they form a broad church that is ahead of the anti-establishment Five Star Movement (M5S) and the centre-left coalition led by the ruling centre-left Democratic Party (PD), who are respectively polling at around 28 and 27 per cent.

In the tight three-way fight, candidates have made economic promises that have observers scratching their heads given Italy's huge public debt, which at 132 per cent of GDP is one of the highest in Europe.

The leading parties are promising everything from the repatriation of hundreds of thousands of illegal immigrants to higher pensions and lower taxes.

One of the M5S's flagship proposals is a monthly universal basic income of 780 euros (S$1,268) for those living in poverty.

La Stampa newspaper calculated that Italy would need to spend "the stratospheric sum" of over one trillion euros to make them all a reality.

None of these big promises will be fulfilled if no group wins a majority under the new system.

In that case, the PD under current Prime Minister Paolo Gentiloni could remain in power, at least for the next few months.

Pro-European forces within the PD and Forza Italia could create a German-style grand coalition. Or euro-sceptics from the League and the Five Star Movement could team up.