LONDON (BLOOMBERG) - A month ago, Michael Fallon was being talked about as a potential successor to Prime Minister Theresa May, if she had to be replaced with a caretaker leader. Now he's the first casualty of the sexual harassment scandal engulfing Westminster.

Fallon announced his resignation late Wednesday (Thursday morning Singapore time), referring obliquely to "allegations" about his private life. On Monday, he had admitted repeatedly touching a female journalist's leg during a dinner. That was prompted by women speaking out about their experiences in British politics in the wake of the Harvey Weinstein scandal in Hollywood.

Although the governing Conservative Party is currently the focus, harassment allegations - and worse - have crossed party lines in Britain. Their full scope and reach remains to be seen - Fallon's departure means a replacement will be needed, which potentially means a destabilising cabinet reshuffle. In the long run it could force the kind of soul-searching of an endemic problem in politics and the corporate work place.

"People may imagine that the prime minister is in charge of Parliament," said Steve Fielding, professor of politics at Nottingham University. "They will see politicians, mostly Tories, in the news doing bad things. Unless May can come up with a dramatic and simple solution to a complex problem over which she has little authority then she will be tarred with it."

Sex scandals in Westminster are nothing new. The Tory government of the 1990s - also divided over European policy - was dogged by revelations of extra-marital affairs. But the allegations here are of harassment, not infidelity. 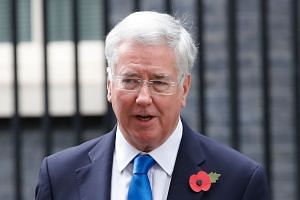 Doing the rounds on social media and the various inboxes of journalists and politicians is an unverified list of names linked to various sorts of sexual activity - ranging from workplace relationships to affairs to inappropriate approaches toward junior staff. It includes redacted names of high-profile figures, some of whom have gone on the record to reject the allegations against them. Britain's libel laws, which require a publisher to prove that something is true, mean newspapers have to proceed with caution.

The stories emerging about Britain's ruling class go beyond the governing Conservative Party, and some are far worse than unwelcome attention or inappropriate requests. The most serious so far concerns the opposition Labour Party. A 25-year-old activist alleged on Tuesday how she was raped in 2011 by a more senior activist at a party event, and then discouraged by a Labour official from speaking out.

"It's not just one party or another, Westminster suffers from sexism and harassment just like the whole of British society," said Alison McGovern, a Labour lawmaker. "What we lack is modern processes for reporting and for supporting victims." For May, the issue is another problem to add to a long list. Her government, weakened by her disastrous election, is struggling to develop a Brexit strategy it can get through Parliament and can ill-afford more dissent among its ranks.

Two weeks ago, her deputy, Damian Green, was asked whether he was worried that there might be a sexual harassment culture in British politics. He batted the question away.

"People's awareness generally of the fact that there are usually men in power who seek to exploit that power for bad purposes is the best defence against it," the First Secretary of State told journalists. Two weeks later, he's in the hot seat himself, after a writer said he'd made inappropriate sexual advances toward her in 2015 and 2016. He says the allegation is "completely false," and is consulting lawyers.

The prime minister has asked her most senior official to "establish the facts" of the allegations around Green. But whatever comes of that, his suggestion that public scrutiny was enough to prevent bad behavior in politics is not proving correct. "The culture has changed over the years. What might have been acceptable 15, 10 years ago is clearly not acceptable now," Fallon told the BBC's Laura Kuenssberg on Wednesday evening.

Among others around Parliament, there's a feeling that the revelations have echoes of the expenses scandal in 2009, where hundreds of lawmakers were criticised for claims they'd made from the public purse. It was an issue that where there had long been suspicions of abuse, but the scale was still shocking, damaging Gordon Brown's embattled government though not toppling him.

May, like Brown, finds herself asked to address an issue of which she has little understanding - Brown's main issue with his own expenses claims was that he'd paid little attention to them - and that's not of her making.

As with expenses, there's a sense that some of the behaviour was long suspected. Alongside the political gossip about relationships that, if illicit, were nevertheless consensual, there were rumours about men who were, in the phrase apparently used by female research staff, "handsy".

There is a key difference with expenses and what is bubbling up now. Back then, there was a database full of documents. As with most sexual harassment allegations, this scandal involves contested claims about events for which there were often no third-party witnesses. Many of the victims may be reluctant to come forward, both for fear of damaging their careers or of hurting a party they support.

Ultimately the expenses scandal exposed a failing in the way the system functioned. Likewise, British politicians trying to address harassment are realising that the setup of Parliament makes it difficult. It's not simply that it's a place where older powerful men work alongside younger people who have little power.

Staff aren't centrally employed, and they have no human resources department or code of conduct. Instead, each lawmaker recruits their own office, working as a small business. If a researcher wants to complain about their boss, it's not clear who they can go to. May on Wednesday said she wanted a central Parliamentary complaints procedure.

But even if she secured agreement to that, the House of Commons itself has few powers to discipline its own members.

The effect of the expenses scandal was to damage all politicians, but because Brown was prime minister and therefore the most prominent politician, he was the most damaged. Looking back, his aides described feeling powerless in the face of the revelations. May, also a weak leader, has no way of knowing where the scandal will go next.

On Wednesday, before Fallon quit, she took a pro-active step writing to other UK party leaders to "come together urgently to address the issue of alleged mistreatment of staff." They will all meet next Monday, at 5.15 pm (1.15am Tuesday Singapore time). in the House of Commons to discuss "how we can work together to deliver the serious, swift and cross-party response this issue demands".

They will need to deliver that.

"One component of a really damaging scandal is that normal people must understand it," said Philip Cowley, professor of politics at Queen Mary, University of London. "People understood what it meant to fiddle your expenses. And they know what this means, too."