MARSEILLE (AFP) – France’s highest administrative court on Friday (Aug 26) suspended a controversial ban on the burkini by a French Riviera town, although other resorts remained defiant, vowing to keep the restrictions in place.

In a judgment expected to lead to bans being overturned in around 30 towns along the French coast, the State Council ruled the measure was a “serious and clearly illegal violation of fundamental freedoms”.

The case was brought by two rights groups seeking to overturn the ban, which has triggered a fierce debate in France and sparked critical headlines around the world.

The suspension of the ban on the Islamic swimsuit, which covers from the head to the heels, was welcomed by the United Nations.

But the ruling, which only applied to the ban imposed by Villeneuve-Loubet, was quickly dismissed by several other towns, including Nice, which vowed to keep the restrictions in place and continue imposing fines on women who wear the full-body swimsuit.

In its decision, the court said local authorities could only introduce measures restricting individual freedoms if wearing the swimsuit on beaches represented a “proven risk” to public order.

The judges said there was no such risk in the case before the court concerning Villeneuve-Loubet, a resort between Nice and Cannes. 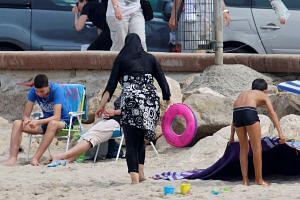 The French Council of the Muslim Faith (CFCM) hailed the ruling as a “victory for common sense”.

And UN spokesman Stephane Dujarric said “we welcome the decision by the court,” noting that the world body stresses “the need for people’s dignity to be respected.”

Police action to fine Muslim women for wearing burkinis on beaches in several towns, including in the tourist resorts of Nice and Cannes, has triggered a fierce debate about women’s rights and the French state’s strictly-guarded secularism.

But the ruling provoked defiance from several Riviera resorts, who pledged to continue imposing fines.

In recent weeks, around 30 French municipalities decided to ban access to public beaches “by anyone not wearing proper attire, which is respectful of good morality and the principle of secularism and not respectful of the rules of hygiene and bathing security”.

Nice town hall said it would “continue to fine” women wearing the burkini as long as its ban put in place on August 19 was not overturned.

The far-right mayor of Frejus, David Rachline, also insisted his ban was “still valid”, telling AFP there was “no legal procedure” against his ruling.

Ange-Pierre Vivoni, Socialist mayor of the Corsican town of Sisco, said his Burkini ban, introudced this month following a confrontation between Moroccan bathers and locals, would also remain “for the safety of property and people in the town because I risked having deaths on my hands”.

“These bans do nothing to increase public safety but do a lot to promote public humiliation,” said Amnesty’s Europe director John Dalhuisen, who added it was time that the French authorities “drop the pretence” that the ban was about protecting women’s rights.

Prime Minister Manuel Valls had on Thursday maintained that the burkini was “a political sign of religious proselytising”.

“We are not at war with Islam... the French republic is welcoming (to Muslims), we are protecting them against discrimination,” he told BFMTV.

CFCM secretary general Abdallah Zekri said: “This victory for common sense will help to take the tension out of a situation which has become very tense for our Muslim compatriots, especially women.”

The State Council heard arguments from the Human Rights League and an anti-Islamophobia group (CCIF).

Anger over the issue was further inflamed this week when photographs in the British media showed police surrounding a woman in a headscarf on a beach in Nice.

The mayor’s office denied the woman had been forced to remove clothing, telling AFP she was showing police the swimsuit she was wearing under her top, over a pair of leggings, when the picture was taken.

The issue has even caused divisions within France’s Socialist government, with Education Minister Najat Vallaud-Belkacem, who is of Moroccan origin, saying the “proliferation” of burkini bans “was not a welcome development”.

She also took issue with the wording of the ban in Nice which linked the measure to last month’s jihadist attack in the resort that killed 86 people and was claimed by the Islamic State group.

In its ruling, the State Council said: “The emotion and the concerns arising from terrorist attacks, especially the attack in Nice on July 14, are not sufficient to legally justify a ban.”

In 2010, France became the first European country to ban the wearing of the Islamic face veil in public.