BRUSSELS (AFP) - Top Paris attacks fugitive Salah Abdeslam, arrested on Friday in a police raid in the gritty Brussels district of Molenbeek, was one of the most wanted men in Europe.

Another three suspects are still on the run, while 11 people have been charged in connection with the Nov 13 bloodbath in the French capital that claimed 130 lives.

Three others are behind bars elsewhere.

Here is a summary of the main suspects:

Salah Abdeslam, 26, a Belgian-born French national, is believed to have played a key logistical role in the attacks, and fled across the border to Belgium hours after the killings. He and his brother Brahim, who blew himself up in Paris, had run a bar together in Molenbeek that was shut down by the authorities just weeks before the massacre. Friends and locals had said they were fond of drink and a joint and that there was no sign they were radical Islamists with murderous intent.

Mohamed Abrini, 30, was filmed with Abdeslam on Nov 11 at a filling station on a motorway linking Paris and Brussels.

"Samir Bouzid" and "Soufiane Kayal" are the names on false Belgian identity cards presented by two individuals checked at the frontier between Austria and Hungary on Sept 9 with Abdeslam.

Mohammed Amri, 27, and Hamza Attou, 21, brought Abdeslam back to Belgium several hours after the Paris attacks. 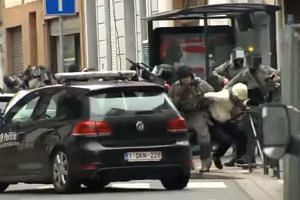 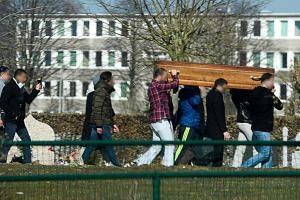 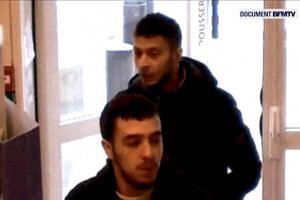 Lazez Abraimi, a 39-year-old Moroccan living in the Brussels region, arrested after traces of blood and two handguns were found in his car.

Ali Oulkadi, a 31-year-old French national, drove Abdeslam through Brussels the day after the attacks and dropped him off at a safehouse used as a workshop for manufacturing of explosive belts.

Abdeilah Chouaa, 30. His name was discovered in the prison cell of a man detained in the southern Belgian city of Namur whom Abdeslam phoned on the evening of Nov 13.

Mohamed Bakkali: a BMW car which he hired was seen in the immediate proximity of three safe-houses in which the Paris attacks were prepared.

Samir Z: A French national born in 1995 was arrested in late November at Brussels airport when he was on the point of leaving for Morocco. He was freed in February.

Pierre N: A Belgian born in 1987, close to Paris suicide bomber Bilal Hadfi. He was remanded in custody until late December.

Abdoullah C, born 1985, of Belgian nationality, had on several occasions talked on the telephone with Hasna Aitboulahcen, the young woman who was killed with suspected mastermind Abdelhamid Abaaoud outside Paris five days after the attacks.

Ayoub Bazarouj: a 22-year-old Belgian living in the Brussels district of Molenbeek where investigators mistakenly thought they had tracked down Abdeslam three days after the attacks. He was freed on Jan 22.

Zakaria J, born in 1986 and of Belgian nationality. Reportedly a friend of Abaaoud.

Ahmed Dahmani, 26: A Belgian of Moroccan origin, he was arrested in Turkey where he arrived from Amsterdam the day after the Paris attacks. Believed to be heading to Syria when he was stopped, he is suspected of helping chose the targets in Paris.

A Belgian of Moroccan origin identified as Gelel Attar by Brussels prosecutors was arrested in Morocco on Jan 18 on suspicion of having direct ties to the Paris attackers.

An Algerian residing in Belgium and suspected of having links with the Paris attacks was arrested on Feb 27 in Algeria. Algerian press reports identified him as Zouhir Mehdaoui, 29, a close associate of Abaaoud.