TALLINN/VILNIUS (REUTERS) - From planes, radars and ships in the Baltics, Nato officials say they are watching Russia's biggest war games since 2013 with "calm and confidence", but many are unnerved about what they see as Moscow testing its ability to wage war against the West.

Nato, or the North Atlantic Treaty Organisation, believes the exercises, officially starting on Thursday (Sept 14) in Belarus, the Baltic Sea, western Russia and the Russian exclave of Kaliningrad, are already underway. It says they are larger than Moscow has publicised, numbering some 100,000 troops, and involve firing nuclear-capable ballistic missiles.

Codenamed Zapad or "West", Nato officials say the drills will simulate a conflict with the US-led alliance intended to show Russia's ability to mass large numbers of troops at very short notice in the event of a conflict.

"Nato remains calm and vigilant," Nato Secretary-General Jens Stoltenberg said last week during a visit to an Estonian army base where British troops have been stationed since March.

But Lithuania's Defence Minister Raimundas Karoblis was less sanguine, voicing widely-felt fears that the drills risk triggering an accidental conflict or could allow Moscow to leave troops in neighbouring Belarus.

"We can't be totally calm. There is a large foreign army massed next to Lithuanian territory," he told Reuters. 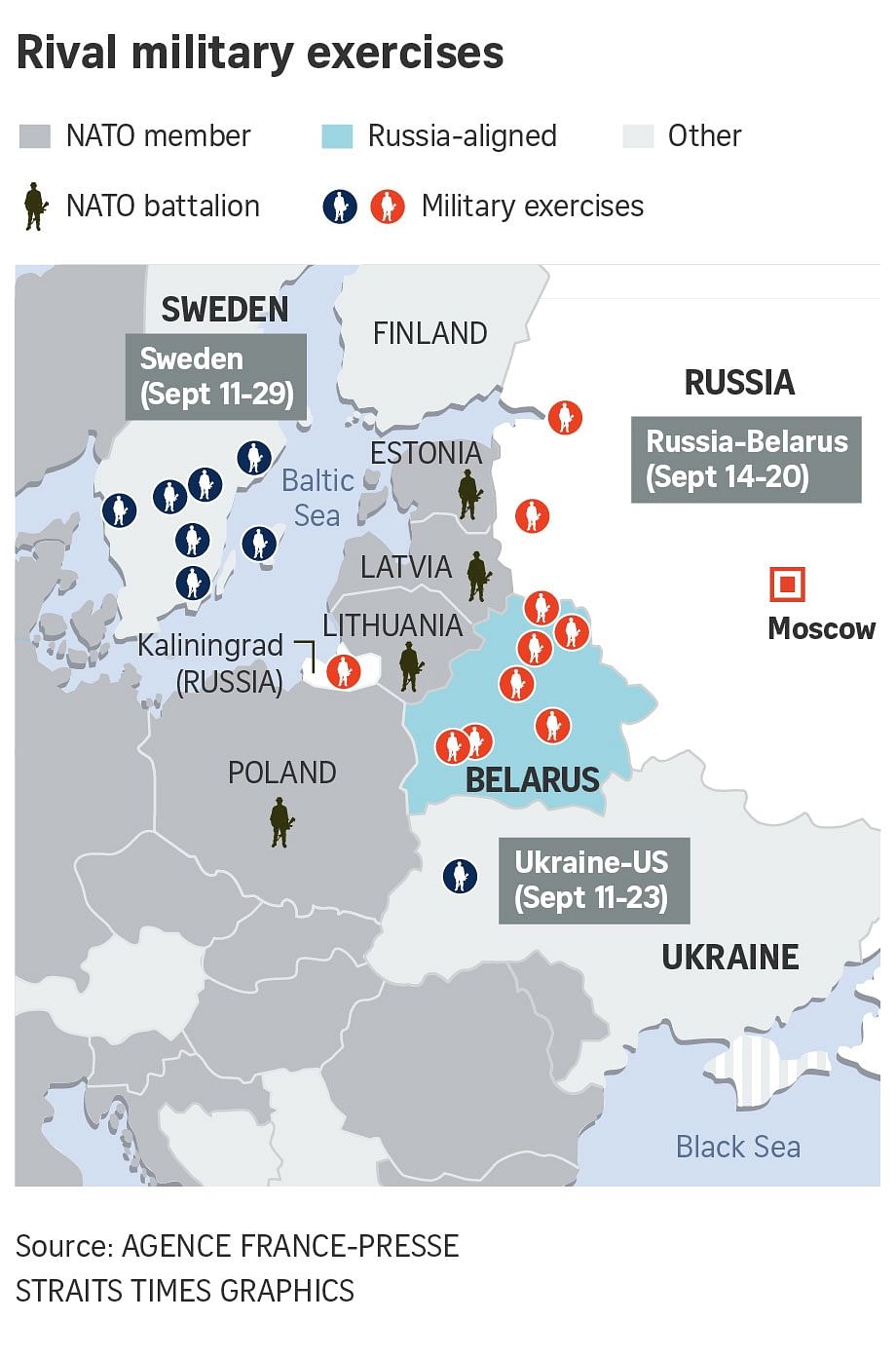 Some Western officials including the head of the US Army in Europe, General Ben Hodges, have raised concerns that Russia might use the drills as a "Trojan horse" to make incursions into Poland and Russian-speaking regions in the Baltics.

The Kremlin firmly rejects any such plans. Russia says some 13,000 troops from Russia and Belarus will be involved in the Sept 14-20 drills, below an international threshold that requires large numbers of outside observers.

Nato will send three experts to so-called "visitor days" during the exercises, but a Nato official said these were no substitute for meeting internationally-agreed norms at such exercises that include talking to soldiers and briefings.

Moscow says it is the West that threatens stability in eastern Europe because the US-led Nato alliance has put a 4,000-strong multinational force in the Baltics and Poland.

Wrong-footed by Moscow in the recent past, with Russia's seizure of Crimea in 2014 and its intervention in Syria's war in 2015, Nato is distrustful of the Kremlin's public message.

In Crimea, Moscow proved a master of "hybrid warfare", with its mix of cyber attacks, disinformation campaigns and use of Russian and local forces without insignia.

"It is all smoke and mirrors," the official said, adding that the Soviet-era Zapad exercises that were revived in 1999 had included simulated nuclear strikes on Europe.

Nato officials say they have been watching Russia's preparations for months, including the use of hundreds of rail cars to carry tanks and other heavy equipment into Belarus.

As a precaution, the US Army has moved 600 paratroopers to the Baltics during Zapad and has taken over guardianship of the airspace of Lithuania, Latvia and Estonia, which lack capable air forces and air defence systems.

Russia's military show of force raises some uncomfortable questions for the alliance because Nato cannot yet mass large numbers of troops quickly, despite the United States' military might, Nato officials and diplomats said.

Nato, a 29-nation defence pact created in 1949 to deter the Soviet threat, has already begun its biggest modernisation since the Cold War, sending four battalions to the Baltics and Poland, setting up an agile, high-readiness spearhead force, and developing its cyberspace defences.

But the alliance has deliberately taken a slowly-slowly approach to its military build-up to avoid being sucked into a new arms race, even as Russia has stationed anti-aircraft and anti-ship missiles in Kaliningrad, the Black Sea and Syria.

"The last thing we want is a military escalation with Russia," said one senior Nato official involved in military planning, referring to Zapad.

In the event of any potential Russian incursion into the Baltics or Poland, Nato's new multinational forces would quickly need large reinforcements. But a 40,000-strong force agreed in 2015 is still being developed, officials say.

Lithuania's Karoblis said he hoped to see progress by the next summit of Nato leaders in July 2018.

Baltic politicians want more discretion given to Nato to fight any aggressor in the event of an attack, without waiting for the go-ahead from allied governments.

During Zapad, Nato is taking a low-key approach by running few exercises, including an annual sniper exercise in Lithuania. Only non-Nato member Sweden is holding a large-scale drill.

Nato Deputy Supreme Allied Commander Europe James Everard told Reuters there was no need to mirror Zapad. "It's not a competition," he said during a visit to Nato forces in Latvia.