GREBNEVO, RUSSIA (AFP) - Boris Netchaeff's family estate was once the image of aristocratic life in pre-Revolutionary Russia but is now a long-neglected site where teenagers hold what he calls "Satanist parties".

Netchaeff's grandfather abandoned the complex of buildings after the 1917 Revolution, leaving his home and his country along with a wave of other anti-Bolshevik Russians.

But nearly a century later, Netchaeff has returned to the country with plans to rescue from oblivion the Novosiltsev estate in the Oryol region, about 270 kilometres southwest of Moscow.

"Since my childhood, I dreamed of restoring the estate, it is a big part of my life," said Netchaeff, who grew up listening to his grandfather's stories in France but now lives with his wife and children in Moscow.

The Novosiltsev estate is one of thousands in the country, a spectre of the life of Russia's aristocracy and merchant classes, who lovingly built their family nests over generations before often brutal nationalisation by the Bolsheviks. 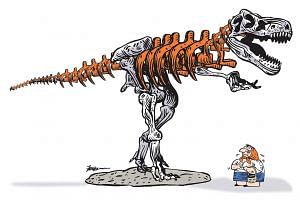 Spectre of Red Revolution haunts Russia to this day

Most of these places passed through the Soviet era as various state institutions. Some were turned into museums.

The majority met the post-Soviet period in ruin, with the government providing formal protection but no longer willing or able to care for them.

"To say that these estates have some sort of bright future is difficult," said Vadim Solovyov, who heads a company overseen by the culture ministry that seeks investors for several state-owned estates.

"The government should admit it cannot save all heritage and hand some of it to private hands, using the profits to save what it can," he said.

The problem is that restoring estates takes millions of dollars but generating a profit from them is next to impossible, he said.

The estate of Grebnevo, east of Moscow, was once one of the region's most famous.

Manicured grounds included "French" and "English" gardens, a cascade of ponds and islands, and neoclassical buildings around an elegant courtyard.

Changing hands several times in its history, the estate was owned by decorated diplomats and military commanders, who had peaches and apricots growing in the orangerie and staged ballets. It turned into an expensive retreat in 1913.

But after the revolution, the estate was nationalised, becoming a tuberculosis sanatorium.

Local historians that kept the heritage of Russia's estates alive following the disappearance of the original owners were persecuted between 1929 and 1931 to stamp out efforts seen as ideologically hostile to the new Soviet order.

"It was one of Stalin's darkest crimes," said Professor Boris Sokolov, an art historian and specialist on estate gardens at the Russian State University for the Humanities.

Like the Novosiltsev estate, Grebnevo stood empty and neglected for years, its regal colonnaded buildings now lacking roofs and covered in graffiti.

Its most recent scheduled auction in October had a starting price of 80 million rubles (S$1.9 million) but failed to attract any buyers, just like the previous attempts at a sale.

Bringing Grebnevo back to its former glory would take at least a further US$10 million, said Solovyov, admitting the auction price might already be inflated.

But, he said, that despite the disintegration of the structures, overgrown by weeds, the government is not permitted by law to go lower after the price was set by an independent expert.

Grebnevo, which needs urgent work, could be waiting for new owners until it completely falls apart.

Investors are not interested in a scenic landscape if it is illegal to build on the land because of cultural protection regulations, Solovyov added, as is the case for Grebnevo.

Professor Sokolov, whose grandfather was a gardener at Grebnevo, said the scheme of selling famous ruins is fundamentally flawed. "Who would live in this wasteland?" he said, referring to its out-of-the-way location far from Moscow. "To whom would they show off the restored palace?"

Instead the government should figure out why Russian society as a whole needs these estates and involve the broader public, he said.

Boris Netchaeff, however, is still yearning to breathe life back into his ancestors' home. He expects to win the right to rent the site long-term and develop a French cultural centre with the help of the French Embassy and cash from a Russian oligarch.

"We want to clean up the park and alleys, to fix up the facade of the house" and set up artistic residencies for French and Russian artists, he said, in the hope of kindling his family's local memory.

"My family was dispossessed of a lot more than just real estate," he said. "They lost their nation, their country."