The Kremlin said Mr Putin had "stressed that the results of the vote fully speak of Recep Tayyip Erdogan's great political authority (and) mass support of the course conducted under his leadership to solve Turkey's pressing social and economic tasks (and) strengthen the country's position in the international arena."

Mr Erdogan - who has dominated Turkey for the last decade-and-a-half - on Monday won five more years in office with sweeping new powers after a decisive election victory, while the opposition raised questions over the conduct of the polls.

Mr Putin stressed his readiness to continue "close joint work" and dialogue with Mr Erdogan, who also led his ruling party-led alliance to an overall majority in Parliament, the Kremlin said.

"This is certainly in the interests of the peoples of Russia and Turkey," the Kremlin said in a statement, praising the "partner-like ties" between the two.

Mr Putin himself extended his almost two-decade rule by winning a fourth Kremlin term in March at a time of high tension with the West.

Mr Putin and Mr Erdogan - who have both led their post-imperial states out of economic crisis but also into a new era of confrontation with the West - have forged an increasingly close alliance in recent months. 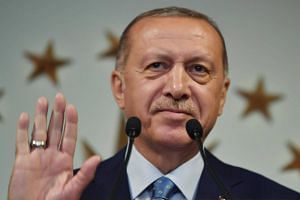 In a sign of the importance of the partnership, Mr Putin went to Turkey during his first trip abroad after winning a historic fourth presidential mandate in March 18 polls.

Turkey and Russia are on opposite sides in Syria, with Moscow remaining the chief ally of President Bashar al-Assad's regime and Ankara backing rebels seeking his ouster.

However, they have worked closely in recent months despite their differences to achieve a political solution.

Ankara-Moscow relations were tested by a severe crisis in November 2015 when Turkey shot down a Russian war plane over Syria, a confrontation both sides have since tried to put behind them.