MOSCOW (REUTERS) - Russian President Vladimir Putin proposed constitutional changes on Wednesday (Jan 15) that would give him leeway to extend his grip on power after leaving the presidency, and picked a new prime minister after Dmitry Medvedev and his Cabinet resigned.

The dramatic moves were widely seen as preparing the ground for 2024, when Putin, now 67, is constitutionally obliged to leave the presidency after occupying the Kremlin or the prime minister's job continuously since 1999.

In a surprise development, Putin said he wanted Mikhail Mishustin, head of the tax service, to be the next prime minister. Mishustin, whose candidacy will be examined by parliament on Thursday, has a relatively low profile and had not been spoken of as a possible candidate.

Mishustin, 53, has played ice hockey with Putin and will inevitably be viewed as a possible presidential successor, as will members of the new government, many of whom are expected to be new.

Critics have long accused Putin of plotting to stay on in some capacity to wield power over the world's largest nation - and one of its two biggest nuclear powers - after he steps down.

Putin, a former KGB officer, has always kept mum on his plans.

But the constitutional changes he set out, which he suggested should be put to a referendum, would give him the option of taking an enhanced role as prime minister after 2024 or a new role as head of the State Council, an official body he said he was keen to build up.

He could even become speaker of a new, supercharged parliament.

Under his proposed constitutional changes, the powers of the presidency would be diminished and those of the prime minister's office beefed up.

Opposition politician Leonid Volkov said it looked as though Putin was digging in.

"It's clear to everyone that everything is going exclusively towards setting Putin up to rule for life," Volkov wrote on social media. Dmitry Gudkov, another opposition politician, said Putin had decided to re-arrange everything around him now rather than wait until closer to 2024. 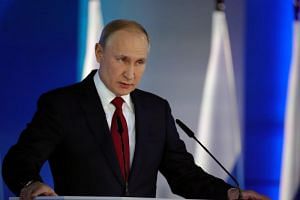 "Constitutional coups like this occur and are completely legal," wrote Gudkov.

Under the current constitution, which sets a maximum of two successive terms, Putin is barred from immediately running again, but his supporters find it hard to imagine Russian political life without him.

It was unclear when a referendum on the changes might be held or when the changes could take effect, but Putin told the political elite in his annual state-of-the-nation speech that he favoured changing the constitution to hand the State Duma, the lower house of parliament, the power to choose the prime minister and other key positions.

"These are very serious changes to the political system,"Putin said.

"It would increase the role and significance of the country's parliament ... of parliamentary parties, and the independence and responsibility of the prime minister."