MOSCOW (Reuters) - Two "old, fat, ugly" Russian flight attendants who launched a bid for fair treatment from their employer, Russia's flagship airline Aeroflot, were surprised to find they have taken off as crusaders for women across Russia.

Yevgenia Magurina, 42, and Irina Ierusalimskaya, 45, sparked a media storm in February by accusing Aeroflot of discrimination over age, weight and looks by demoting women wearing clothes larger than a Russian size 48, or international large.

They were outraged that Aeroflot was taking women attendants like them who were larger than this size off the better-paid long-haul international flights and stripping them of bonuses.

Dubbing themselves STS - a Russian abbreviation of "old, fat ugly" - the two women filed two separate lawsuits against the airline, but lost as district courts in Moscow didn't find these standards - which Aeroflot didn't deny - discriminatory.

But the flight attendants appealed the ruling in the Moscow City Court and on Sept 6, the judges sided with them this time, declaring that enforcing such dress standards violate labour laws but refusing to acknowledge discrimination.

"That doesn't matter. The most important thing is that now they will have to get rid of clothing size standards," Magurina told the Thomson Reuters Foundation.

"Professionals should not be evaluated based on their clothing sizes, and I hope that this practice will come to an end," she said. 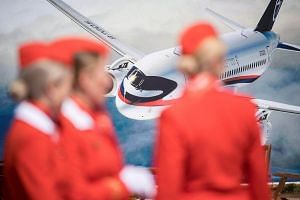 The court ruling did, however, allow the airline to declare its own victory, stating in written comments to the Thomson Reuters Foundation that they don't discriminate against flight attendants, and that the court ruling "established that".

But women's rights campaigners hailed this an important milestone in a battle against gender discrimination in Russia, where "conservative values" are being aggressively promoted by state institutions and women often seen as wives and mothers.

"The two women and their lawyer did a stellar job. Women will know now that it's worth it, to fight for your rights,"women's rights advocate Alyona Popova, founder of the W Project support network for women, told the Thomson Reuters Foundation.

It wasn't an easy case to win, said Ksenia Mikhailichenko, the women's lawyer and a labour dispute specialist with the Moscow-based Center for Social and Labour Rights NGO.

From the first court hearing, Aeroflot admitted to having certain demands regarding their flight attendants' clothing size and weight, arguing these demands were justified.

Overweight flight attendants may not be able to move swiftly around the plane, the company claimed.

The partially-state owned airline also said that passengers prefer to see "young and slender" flight attendants, and it is important Aeroflot lives up to their customers' expectations.

"But these demands only apply to international flights, and passengers on domestic flights can tolerate overweight, repulsive flight attendants that get stuck in the aisle?" said Ierusalimskaya who is still not receiving bonuses and remains confined to domestic flights.

Popova said the most important thing about the Aeroflot case was that it forced people to talk about workplace discrimination against women in Russia.

According to the government's National Strategy of Action in the Interest of Women, the number of managerial positions in Russia occupied by women has fallen over the past decade to 32.7 per cent in 2015 from 37.3 per cent in 2006.

In federal government bodies, the amount of women in management is lower, at 25.3 per cent.

The gender pay gap is also significant with an average woman's salary 27.4 per cent lower than that of a man, the document said.

Finally, Russia still has a list of 456 jobs women are prohibited from taking including work as carpenters, divers, firefighters, drivers of electric trains and heavy trucks, or members of deck and engine ship crews.

These jobs are considered too dangerous for women and their reproductive health.

Yet women rarely stand up for themselves and take legal action as it takes too much time, energy and resources, said labour lawyer Mikhailichenko.

"In Russia, burden of proof lies with the plaintiff in these cases, which means that a woman would have to prove to the court she was discriminated against," said Mikhailichenko.

"Plus any legal action means conflict with the employer that may put your career in jeopardy. Not everyone is ready to risk it."

But Mari Davtyan, a women's rights lawyer and member of the Ministry of Labour's Coordination Council on Gender issues, said there is finally awareness at government level that change is needed.

On Sept 14 members of the council, chaired by Deputy Prime Minister Olga Golodets, held their first meeting and discrimination at work was one of the issues on the agenda with the Aeroflot case mentioned as a prominent example.

"Everyone agreed that discrimination exists and that it needs to be dealt with," Davtyan told the Thomson Reuters Foundation.

"(The Coordination Council) has just started its work .. but I'm optimistic and believe that we'll get there."