MOSCOW (REUTERS) - Russia warned the United States on Friday (Aug 10) it would regard any US move to curb the activities of its banks as a "declaration of economic war" and would retaliate, as new sanctions took their toll on the rouble and US lawmakers threatened more.

The warning, from Prime Minister Dmitry Medvedev, reflects Russian fears over the impact of new restrictions on its economy and assets, including the rouble which has lost nearly 6 per cent of its value this week on sanctions jitters.

Economists expect the Russian economy to grow by 1.8 per cent this year. If new sanctions proposed by the US Congress and the State Department are implemented in full, which remains uncertain, some economists fear growth could weaken to almost zero.

President Vladimir Putin discussed what the Kremlin called "possible new unfriendly steps by Washington" with his Security Council on Friday.

Moscow's strategy of trying to improve battered US-Russia ties by attempting to build bridges with President Donald Trump is backfiring after US lawmakers launched a new sanctions drive last week because they fear Trump is too soft on Russia.

That in turn has piled pressure on Trump to show he is tough on Russia ahead of mid-term elections. The State Department announced new sanctions on Wednesday, blaming Moscow for the poisoning of a Russian ex-spy in Britain in March.

On Friday, the White House strongly condemned the poisoning incident, which a spokesman for Trump's National Security Council called "a reckless display of contempt for the universally held norm against chemical weapons". 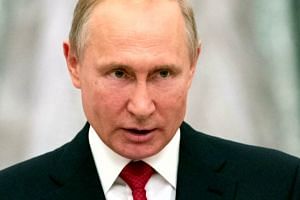 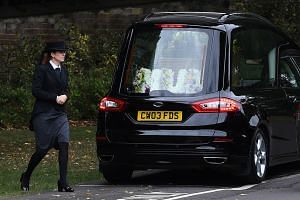 The new sanctions pushed the ruble to two-year lows and sparked a wider sell-off over fears Russia was locked in a spiral of never-ending sanctions. Russian Foreign Minister Sergei Lavrov complained about the new sanctions in a phone call on Friday to US Secretary of State Mike Pompeo.

Pompeo and Lavrov discussed sanctions and Syria's civil war during the call, State Department spokeswoman Heather Nauert said in a statement. Pompeo reiterated that Washington wanted a better relationship with Moscow and he and Lavrov agreed to future dialogue, she said, without elaborating.

Separate US legislation introduced last week in draft form by Republican and Democratic senators, dubbed "the sanctions Bill from hell" by one of its backers, proposes curbs on the operations of several state-owned Russian banks in the United States and restrictions on their use of the dollar.

Medvedev, speaking on a trip to Russia's far east, said: "I can say one thing: If some ban on banks' operations or on their use of one or another currency follows, it would be possible to clearly call it a declaration of economic war."

"And it would be necessary, it would be needed to react to this war economically, politically, or, if needed, by other means. And our American friends need to understand this."

Pro-Putin lawmaker Vyacheslav Nikonov who in 2016 prompted the Russian parliament to erupt in applause when he announced Trump had won the White House, called for a tough response.

"War is war," Nikonov wrote on Twitter. "We need to rid ourselves of any dependency on our rival as much as possible and stop helping them. Our response must not just be symmetrical but preventative. We need to respond now and toughly."

In practice however, there is little Russia can do to hit back at the United States without damaging its own economy. Officials in Moscow have made clear they do not want to get drawn into what they describe as a mutually damaging tit-for-tat sanctions war.

The threat of more US sanctions kept the rouble under pressure on Friday, sending it crashing to its lowest since June 2016 before it recouped some losses.

"The Russian currency has been caught in a perfect storm of weakening crude oil prices and the new US sanctions, in addition to the threat of even tougher punitive measures in the coming months," said Lilit Gevorgyan, economist at IHS Markit.

The Russian central bank said the rouble's fall to multi-month lows on news of new US sanctions was a "natural reaction" and that it had the necessary tools to prevent any threat to financial stability.

Central bank data showed on Friday it had started buying less foreign currency on Wednesday, the first day of the rouble's slide, to try to tamp down volatility.

Analysts doubt, however, that the authorities will take much action to support the falling ruble, as they decided not to intervene during a similar sell-off in April, which was also driven by US sanctions.

The fate of the US Bill that would tighten sanctions much further is not certain. The full US Congress will not be back in Washington until September, and congressional aides said they did not expect the measure to pass in its entirety.

While it was difficult to assess so far in advance, they said it was more likely that only some of its provisions would be included as amendments in another piece of legislation, such as a spending Bill Congress must pass before Sept 30 to prevent a government shutdown.